Joe on THE issue

After all the comments here and elsewhere about Joe's glaring lack of addressing that minor little scrap over in Mesopotamia, I guess somebody nudged Joe and whispered that he should add something to his website. 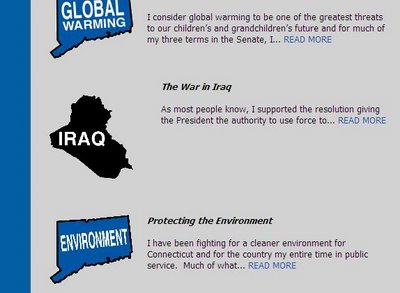 It's stuck wayyy down the list, between Global Warming and the Environment (two issues that are so unlike each other that they require separate topics).

And the text of the Iraq topic is somewhat mind boggling. (Speaking of which, try typing "boggling" at five AM and see if it doesn't at first come out as "blogging"!)

Here's what non-combatant Joe Lieberman has to say about Iraq:

As most people know, I supported the resolution giving the President the authority to use force to replace Saddam Hussein’s brutal government, as did most Senate Democrats. I still believe that was right.

We all know you tend to stand by your decisions long after they've been proven wrong and disastrous. There are brutal governments all over the world right now, Senator. Do you advocate us bombing the shit out of all those rogue nations?

What I don’t think is right, as I have said over and over again, are many of the Bush Administration’s decisions regarding the planning for and execution of the war. The fact is, I have openly and clearly disagreed with and criticized the President for, among other things:

* not winning the support of our allies in the run-up to the war;

Yeah, that was a major screw up. I guess some nation's leaders DIDN'T betray their people

* not having a plan to win the peace;

We still don't have one. I'd really love to hear YOUR plan for an eventual end to this mess, Senator

* not putting enough troops on the ground;

You're saying that calling up nearly every reservist, extending rotations, and depleting our nation's military readiness WASN'T enough. Maybe we should start up a draft. You know what a draft is, don't you Senator? It's that thing you managed to avoid repeatedly while other people were fighting and dying in Vietnam

* putting an American in charge of the Iraqi oil supply.

Ah, so THAT'S the REAL reason for this war, eh Senator?

And I have said that if I were President, I would ask Secretary Rumsfeld to resign. I first said that in October 2003.

Wow, talk about taking a major step to end this ongoing disaster! Something tells me Rummy's replacement won't suddenly wave a magic wand and fix all the problems associated with that quagmire.

But I do LIKE the idea of someone with a magic wand waving it and having 2,600 dead American soldiers come back to life, and $300 billion magically reappear in our treasury. And I'm sure there are some Iraqi families who'd enjoy seeing their dead relatives, their nation's infrastructure, and their civil war magically revert to where it was four years ago.

The last thing I want to do is needlessly add to that kind of heartbreak. I want to get our troops home as fast as anyone, probably more than most.

I don't believe that statement for a second.

But if we simply give up and pull out now, like my opponent wants to do, then it would be a disaster to Iraq and to us. We would run a high risk that Iraq would become like Afghanistan when the Taliban were in charge, and Al Qaeda had safe haven from which to strike us. And we would run a high risk that the chaos and violence would spread and engulf Iraq’s neighbors.

That won't happen unless we let it. Think about Iraq during the period between the wars. The country was effectively blocked from indulging in terrorism. We ruled the skies over Iraq, with no-fly zones and boarder security. That's what we need to go back to. If we took all of our assets out of harms way and kept them on the boarders, we'd be safer and the Iraqis can get back to rebuilding their country

Now I understand that many voters in Connecticut disagree with me and are very angry about the war. I don’t think there is anything I can say to change your mind about whether we should have gone to war or when we should bring the troops home.

Our mind isn't the one that needs changing.

What I will say is this: I not only respect your right to disagree or question the President or me, I value it. I was part of the anti-war movement in the late 1960s, so I don’t need to be lectured by my opponent or anyone else about the place of dissent in our democracy.

Aren't you the guy who said that if we criticize the President we do it at our nation's peril? And as far as your anti-war position in the '60's, didn't you try to block students from protesting at Yale? I know I have an article here someplace...

You also need to know that I have never suggested that the President or anyone else – including me – should be immune from criticism. The best proof of that is I myself have challenged the President’s policies on many occasions.

Well, that's a lie. Unless you're saying that you've never spoken those EXACT words in that EXACT order. Then you might be telling the truth.

But I believe it is important how we disagree. My concern was, and remains, that if opponents or supporters of the war go beyond disagreeing to exploiting the war for partisan political purposes, much like Republicans did to Max Cleland on homeland security, we could lose more than an election. We could put our mission in Iraq, the lives of thousands of American soldiers carrying it out, and our national security at risk. That is what I care about. That is what I will not let happen.

I can never adequately understand your "partisan politics" claim. This isn't about parties, it's not about Democrats and Republicans, it's about RIGHT vs. WRONG. What's partisan about wanting to see our leaders do the RIGHT thing?

What we are doing is clearly not working. That is why I have called for new leadership and direction from the Pentagon. We also have to demand that the new Iraqi unity government do a better job of containing the sectarian violence, and working with our allies, the British in particular, we should convene an international crisis conference on Iraq, bringing in the Europeans and particularly the other Arab countries that are now worrying about what happens if Iraq collapses.

Joe, it AIN'T the Pentagon's fault! Take a look in the friggin' mirror if you want to see who's responsible for this ongoing disaster! And it's way too late to ask for international counsel about Iraq. We didn't listen to them BEFORE attacking that nation!

Going forward, we must not be trapped in the false choice between setting political deadlines for withdrawal or “staying the course,” when both options will lead to failure. Instead, we should turn our passions, however much we may disagree with each other, into a common energy to bring about the best result for our national security and for the troops who are in harms way.

How about coming up with a PLAN, Senator? If neither option is good, please GIVE US ANOTHER OPTION!

I am opposed to an indefinite, unconditional deployment of American troops.

Which is exactly what you are supporting right now.

The fact is that the sooner that the Iraqis can take control of their own destiny, the better off it will be for them and for us.

So let's give them a reason to self-police and govern their nation.

But if we rush to meet some arbitrary, pre-set political deadline, as bad as things are now they will definitely get much worse. There will be an all-out civil war in Iraq, Iran will surge in to control large parts of that country, there’ll be a wider, regional war, and al-Qaeda and other jihadist terrorists will use Iraq as a safe haven from which to attack us and others.

There is already a civil war in Iraq, we're already breeding terrorists by our continued occupation of that country, and our invading Iraq has made the entire region unstable. Iran feels threatened by our hawkish actions in that part of the world. By allowing the Iraqis to govern themselves, we'll send a message that we aren't planning to attack them.

My goal is to work with both sides to bring our troops home from Iraq in a responsible way that does not lead to more terrorism in the region and less security for us here at home.

You keep working on that, Joe. Take your time.

Remodeling and Home Improvements. YEAH.. If you are like me it seems like there is never enough time in the day.. You get home late and leave early.. then the weekends thats another story by itself. My wife has found it easier to hire somebody if you we need help with remodeling. She fond a great site for remodeling at http://remodelinghelp4u.com and wanted to share it with you.. Im glad to find help when I need it.. I hope you have great luck remodeling your home...