More on the new voting machines

I'm following up on the new Diebold (pronounced "DEE-bald" not "DIE-bold", although I do continue to pronounce it that way because I'm a phonetic dogmatist) optical scan technology which is to be implemented in 25 Connececticut towns and cities (link for list) for the November election, and throughout the state in 2007. 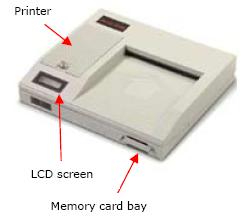 I've been going through Secretary of State Susan Bysiewicz's press releases about the new technology, and there is something a little odd about them. I'll admit that I haven't perused each and every one of them, but the five or six I've read didn't mention the name "Diebold" even once. She refers to LHS Associates, the company that is selling the optical scanning machines, and IVS LLC which sells the machine for people with disabilities.

But nowhere is any mention made of Diebold.

Sure, there are links to the company websites at the very end of SOME press releases, and if you go to them they have detailed information on the Diebold machines easily available. But it's an unnecessary extra step that shouldn't be required to find out the manufacturer of the machines.

I'm not sure how the State normally deals with dispensing information about how their contracts are awarded, but wouldn't it be considered "press release-worthy" information to mention the name of the manufacturer of a single machine type that is essentially the entire budget of a $15 million state contract?

I'm also going to pursue information about the security testing of the system at the UConn Computer Sciences department. I found details of the study via TrueVoteCT, which is a non-partisian group of Connecticut voters dedicated to bringing accessible and verifiable voting to Connecticut. I'll try to contact the people running the testing and see what sort of results they're getting. 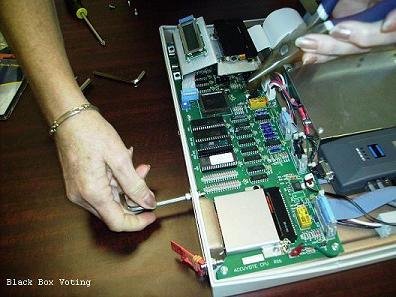 BlackBoxVoting.Org has a detailed report on the hackability of these machines, with step-by-step illustrated instructions on how to open the machines and replace/hack/copy the memory cards without breaking the official security seal on the unit.

I guess it makes sense that those who use technology (ie computers for communication) would know and understand the drawbacks of it for voting machines.

But I think I have the simplest way to handle it.

Just copy what the gaming industry does when it comes to audit trails and quality control whith machines.

I think most people would agree that they feel more confidant getting a fair shake from a slot machine than hey do with a voting machine.

Researches over at Princeton University are studying the Diebold voting machines. They have a very interesting video about a slightly different model of voting machine.


What exactly is wrong with the old machines?

Bob:
I think I just saw you sail past.

I was the fat lady in the purple towel on the 2nd floor of the beat up house next to one of the new McMansions in Point Beach area.

Can't you blog while on board, dude? My faith in you is all shook up.

more here on the machines (and lack of training) from Americablog:
http://www.baltimoresun.com/news/nationworld/bal-te.voting16sep16,0,2013513.story?coll=bal-home-headlines

Baltimore's machines crashed 20 times, and they consider themselves being used 'guinea pigs' for the next election - they're considering taking them offline.

Just looked at the step-by-step with photos from the link you provided to BBV and Bev Harris. _Holy_ Sh*t_...!

I'm appalled at what I saw, and I am utterly convinced that diebold intentionally designed the case to be vulnerable yet appear to be secure. There are so many ways they could have designed the thing differently, using a wide variety of other fasteners, etc. After all, that turd is from the company that makes machines for banks that dispense money. They know what they're doing...

I remember back in the day people hacking their cable TV boxes to get the premium stuff without paying. Those boxes were far more secure, but people learned how to beat them anyway. Some had steel pins hidden in the seam, and one had to have a strong magnet and the knowledge where to place it along the side in order to get the cover off without damaging it...

This is an outrage, and it's good you're on it. Hackable voting machines plus a controlled media broadcasting questionable polls that always say the race is neck-and-neck enable those in power to steal elections...

Thank goodness that our machines are the optical scans and not the ATM style machines that are so hackable.

The optical scan machines spit out the paper ballot so that a recount can actually take place - unlike the machines in Baltimore...

Oh and what is wrong with the old machines is that no one has manufactured them for 20 years, they are breaking down, and repairs are prohibiively expensive.

Also, they are pretty easy to hack on their own - just start the count at a numer other than zero!

And, because of the above two reasons (mostly the former), they are not HAVA compliant.

Supposedly CT Secy of State Susan B said that a certain number of towns can opt out of using the Diebold machines for this election and stick with the old lever voting machines - maybe that is not a bad idea.

I think it's technological brinksmanship for the govt to insist on using these machines when their security is so frequently in question. Instead of meekly going along with a law (HAVA) that may be making democracy less safe, why can't CT choose to ignore it, stick with our lever machines, and worry about legal challenges later? A good old sin of commission that will prevent either the possibility -- or the appearance of the possibility - of undemocratic "sins of commission" (vote tampering)

If it's a funding problem, didn't I read that the state has unanticipated surplus of funds from the fact that the gas tax is based on a percentage of the price, and gas price is much higher than projected, raising CT revenues from the gas tax? The state is likely not going to lower the tax because last time they did, all that happened was that oil companies' "retail outlets" just upped the price of gas to match the old price and pocketed the profits.

I don't want to wake up on Nov 8 and wonder if our election was hacked.