Back from the Parade and Danbury DTC

I'm just finishing up copying my video to my PC, so I'm gonna make this short.

The parade was interesting, and I had a lot of great footage of Ned, his family, and hundreds of Lamont supporters marching. 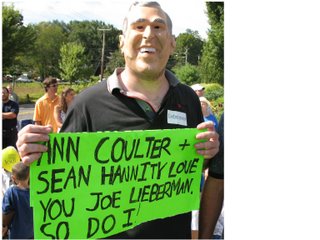 The mounted police or some other horse troops led off the parade. I can tell they've been feeding the horses exceptionally well, because the parade route was decorated with impressive piles of bio-degradable "exhaust"; you really had to watch where you were going, which isn't easy when you are walking backwards to video the candidate and his supporters marching!

Joe Lieberman also marched, although oddly, he lagged WAY behind the rest of the parade. After Ned and the Newtown Democrats marched, by parade's end there was a gap of nearly 20 minutes before Joe and his few supporters came by. 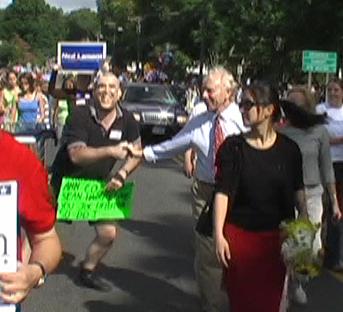 For the record, I have absolutely nothing to do with this person. But it WAS funny the way Joe shook his offered hand, and then got a good look at him and recoiled like something that smelled really awful assaulted his nostrels.

The media was well-represented, and I even got my mic pushed away by the CNN camera guy when I was holding it up to Joe to hear what he had to say during their interview. I did get to ask Joe a respectful question, and I think Tammy Sun (Joe's new press secretary) was captured on tape squawking that the Senator had to get going NOW. He still answered my question, even though it was my usual on-the-run interview. Fun.

"*xyz" (from FDL, who came up from NYC to support Ned) and I got stuck in parade traffic, so I got to the Danbury DTC as Ned was finishing up his statements. But I got some good video of him speaking directly to everyone who wanted to talk to him.

I missed it! There was a big flail, documented by Bushman

I was there. Wasn't that big a flail.

For the record, Bushman is a frickin' maniac. But a funny one.

Despite being disinvited to the Newtown Labor Day parade by organizers focused on party politics, thousands of Newtown residents welcomed Lieberman to their town with a deluge of handshakes, hugs, and warm wishes. Having spent the afternoon at the Newtown parade in close proximity to both the Democratic contingent and Lieberman’s Team Connecticut contingent, I can tell you that Joe Lieberman found overwhelming support among the people of Connecticut today. In fact, on more than one occasion, parade organizers had to ask him to pick up the pace because supporters were crowding him so much that he couldn’t continue walking. One man saw this and went up to Lieberman and said, “Joe, you take your time. Enjoy this. We love you.” Before the parade even began, one woman walked up and gave him a bouquet of flowers to express her support and appreciation. Also before the parade, dozens of men and women in uniform asked him to take pictures with them and told him how much they appreciated his support over the years. While it might be true that there were more political supporters the group walking with Lamont, it is also true that there were more REAL PEOPLE supporting Lieberman along the streets of Newtown.

There wasn’t a single point along the parade route when Lieberman didn’t hear screams of support. Several of the other parade organizers made sure they went up to Lieberman to say that they were glad he was there. People applauded and yelled things like “Hang in there Joe!” and “We’ve got your back!” and “You’re the only one who can get things done for us Joe!” all along the way. Lieberman quickly took off his jacket, rolled up his sleeves, and stopped and took pictures with the crowds of people. Lieberman met supporters of every party affiliation today…Democrat, Republican and Independent. For Lieberman, the day was about real people, not politics. Of course, that didn’t stop his opponents from playing politics and pulling childish antics here and there. A grown man dressed in a Bush costume and holding up a hateful sign constantly tried to disrupt Lieberman’s interaction with the press and his supporters, but Lieberman was in such a good mood by all the warm wishes he was receiving from his constituents that he just politely ignored them and continued focusing on the people. In fact, at one point, even the Lamont supporter who was constantly throwing a handheld camera into Lieberman’s face in hopes of catching some embarrassing slip-up said to him, “Thank you, Senator. You are being a really good sport. I hope you’re enjoying this day.”

It is borderline stupid to accuse a man of such clear integrity of being involved in or supportive of any act of violence. Because Lieberman had not been able to focus on the reporters while he was walking due to the crowds, he agreed to talk to them for a few minutes at the end of the parade route. A group of reporters were waiting patiently for him to finish shaking hands. After a while, he finished and began taking their questions. A man with a baby and a Lamont sign was making an effort to push his way into the camera shot and a scuffle broke out between him and a few other residents who were encouraging them to be polite and stop trying to push his way into Lieberman’s interview. None of the people involved in the disagreement were paid Lieberman staffers. In fact, I saw a few of the Lieberman staffers try and separate the people who were fighting and calm everyone down. When it became clear that no one was physically hurt, Lieberman returned to the interview that had gotten interrupted.

All in all, it was a fantastic day for Joe Lieberman. It affirmed that when it comes to real people, they’re lining up and marching behind Joe.

Fuck dude, you are a wordy S.O.B.! How 'bout breaking up some of your drivel into readable PARAGRAPHS?

There are so many things you don't understand that I doubt I'll get to all of them. But I'll try. Because, you know...I'm a giving person.

Joe was slow in a selfish, it's all about ME sort of way...you DO know that the Fire Trucks and the entire rest of the parade ran late because Joe felt he needed to shake EVERY single hand that offered itself to him. I've never seen such a desperate display of neediness in my entire life!

I was the guy with the camera, who in the spirit of good-sportsmanship and courtesy, told the senator to have a nice day and thanks for being a good sport. He understood, even if you don't. We can have dissent without rancor.

The baby incident was unfortunate, and in fact I helped talk the victim into not pressing charges. Because what counts is that we work to effect change. I'm sure nobody in the Lieberman campaign knew those idiots who tried to assault a man holding an infant. I would never accuse them of something like that.

The stuff they do everyday, as a matter of policy and as an expression of what Joe stands for...well, that's plenty to work with.

But thanks for reading "Connecticut Bob".

And have a nice day!

Bob, as always, you rock! Good to see you again today.

Hey Bob, I had no idea you weren't a "real person" -- you looked real to me! Funny how Lieberman supporters are easily misled by Joe's lies, but than again, they are "real" lies so maybe that's where "truthteller" is confused? I guess "truthteller" suffers from the same problem with numbers like Joe does: he says "thousands of people” were loving up Joe today and Joe says only 15% of Democrats showed up to vote in the primary instead of the 43% that REALLY showed up. If “truthteller” wants to talk about the thousands of “real people” who aren’t political, how about the 2,600 plus real soldiers who have died over Bush’s illegal war? You know the war that Joe supports – now there’s something worth getting outraged over.

Wonderful, wonderful work Bob. I am so excited by the demonstration of democracy that you in Connecticut have shown. It's inspiring to see everyay people use their wits to break down the walls created by professional pols.

Maybe truthteller should just finish high school ....we are not interested in your grade school like essay on to embellish.