The Republican Fear Machine is grinding out more untruths.

This morning while watching the Channel 8 news, a Nancy Johnson commercial appeared. I watched it with disbelief...how stupid does she think people are? Apparently she's trying to tap into that vast reservoir of "low-information voters" that former Lieberman campaign operative Sean Smith was referring to.

Here's the text of the ad: 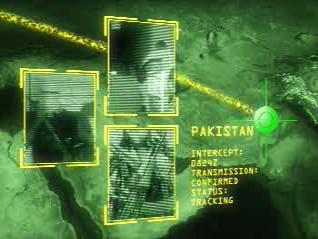 A call is placed from New York to a known terrorist in Pakistan. A terrorist plot may be unfolding. Should the government intercept that call, or wait until the paperwork is filed? Nancy Johnson says act immediately, lives may be at stake.

Fair enough. Of course we should act immediately. We don't want this guy to get away. So far I'm following you, Nancy.

Liberal Chris Murphy says No, apply for a court warrant even if valuable time is lost.

Here is where Nancy misleads the people. The FISA law clearly states that the government can tap communications between a person in the United States and a foreign nation for up to 72 hours before applying for an order to continue surveillance.

In the entire time the law has been in effect, there have been only FOUR instances of the order being denied, out of THOUSANDS. If you show up with a tape that has a known terrorist in Pakistan on it, your application WILL be approved.

Everybody needs to remember that the REASON the Bush administration DOESN'T want any oversight on surveillance is so they can watch ANYONE they want! Something tells me it ain't just the big bad terrists they're keeping an eye on! 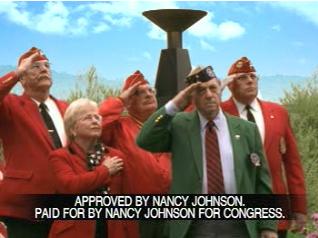 Smarten up, Nancy....stop with the LIES.

Support Chris Murphy for Congress, Democrat in the 5th District.

UPDATE: The anti-Nancy blog No More Nancy has an even MORE detailed deconstruction of the ad. It's "Must See TV!".

I saw the ad last night and it made my blood boil. I just wrote the Murphy campaign to ask for a list of news papers in the district so I could contact them, I live in the 2nd CD.

This ad does bring me to some conclusions though. Ms Johnson does not understand FISA as writen and amended. If she did understand it she wouldn't have aproved an ad with bold face lies. Ms Johnson also seems to be a bit week on her role in congress. If this is law puts us at so much risk then some one, some on in congress needs to change it. Unfortunately Ms Johnson finds it better to curse the darkness thean light a candle.

Wholy crap, she has the worst ads on tv. Possibly worse than HoJoe's.(There's the one on taxes too.) And we all know who pays for it. I would really like to see Chris Murphy do more ads. Because Nancy Johnson is not a benign Rethuglikan. Murphy has just got to win.

How about a response advertisement where George Bush decides that he wants to listen to the phone calls of his political opponents - and is free to do so because there are no limits on his wiretapping power.

And then George Bush decides he wants to listen to the private calls of average citizens in order to blackmail them for various reasons - and, again, is free to do so because there are no limits on his wiretapping powers.

What are these vets and Johnson looking at? Fighter jets? Visions of religious icons? Storm clouds just over the horizon?

And what is that religious icon in the background?? Looks a little creepy to me.

And, hey, how come it's my city that's calling the terrorists? My recollection of 9-11 was that those cells were NOT located here. I know it's a smaller part of this ad, but damn, I am tired of being painted as the big bad terror-causin city.
I sent an email to my Rep. Charlie Rangle asking him why she is slandering us. I hope he takes her to task,
UptownNYChick

Like Gary, I found myself wondering about that thing in the background. Is this something that actually exists somewhere in Connecticut? Is it some strange fundie religious symbol?

Reminds me of something goose-stepping brownshirts would circle at a celebration of the reign of a Glorious Fascist Leader. Maybe this is the intended imagery of the ad (motivates the brownshirt "base" of the authoritarian cult currently in charge of the national Republican party).

Does anyone know what that thing in the background actually is?

Maybe someone needs to remain Nancy Johnson of how Bush’s National Security Advisor, Condi Rice decided to ignore the August 6th PDB, “Bin Laden Determined to Attack Inside the United States.” And on 9/11 we were attacked. And when we had our chance of capturing Bin Laden in the hills of Afghanistan, what does Bush do but divert our troops so they could go to War with Iraq; a country that had NOTHING to do with Bin Laden or the attack on 9/11! Yeah, Nancy, whatever you do, don’t confuse your voters with real facts because you just may lose that way!!!!

That thing in the background looks like an "eternal flame" memorial and I'll guess that the dupes in uniform and the harriadan are saluting the flag. Because we know democrats hate that!

We need to start calling these reps on their IGNORANCE. Yeah I know they're lying, but maybe we push that they're too stupid to be in office when "lives are at stake".

If Nancy doesn't know you can get warrents after the fact under FISA, what other critical facts is she ignorant of in our battle against terrorism.
Don't let Nancy tred on our constitution ...

Nancy Johnson owes you a dinner.

I enjoy your work. Thanks, I am sending her an invoice right now. I really was upset.