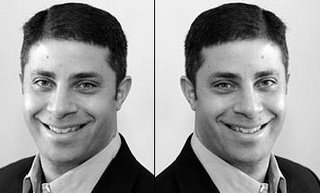 I can't tell if Lieberman mouthpiece Dan Gerstein is trying to be ironic, or if he really doesn't know how much he's lying here.

State of the Blog, Part 2

We wanted to alert our readers that as of this morning we are removing the comment feature from our blog.

The reason behind this decision will be obvious to any one who has spent time reading the barrage of ugly, insulting and hateful comments that some Lamont supporters have been posting by the hundreds.

CORRECTION: You don't know they are Lamont supporters, do you Dan?

You don't have to be a Lamont supporter to hate Joe Lieberman's stupid and destructive politics.

We knew we were taking a risk by not moderating or censoring the comments section. But it was our hope to provide an open, engaging forum, even if it meant tolerating a fair amount of criticism from our opponents.

When we saw the disturbing direction most of the Lamont supporters were heading after the first two days, we posted an appeal for them to tone it down -- to show some respect for the fact that we were allowing them to make their voice heard on our site, to stop with the personal attacks on Senator Lieberman and our staff, and to stop posting under our staff member's names.

AGAIN, do you realize that hating Joe's wasteful policies doesn't a Lamont supporter make? When are you going to get that through your head, Dan?

Then again...all your constant harping on that lie makes me wonder if perhaps some, if not most, of those comments weren't posted by Lieberman operatives in order to allow you to play the "hate card"? Your refusal to use the most basic requirement to register to comment on your blog eliminates any pesky "net tracks" that may embarrass the people commenting.

Karl Rove has contacted Joe's people. That's a fact. I guess it's possible he faxed you guys a few pages out of his vile playbook.

As a result, we felt we had no choice but to end this experiment and remove what had become nothing more than a destructive distraction.

We in no way blame the Lamont campaign itself for this turn of events. The Lamont campaign blog did discourage its supporters from posting insulting or hateful comments when our blog went live. And just last night we received a thoughtful email from Lamont’s Internet communications director, Tim Tagaris, condemning the personal attacks littering our comments section and expressing his disappointment at the behavior of some of the people doing the posting. reiterating that the Lamont campaign had nothing to do with the offensive and personal comments. [Note: We misunderstood Tim's email and we apologize for this misunderstanding.]

That is much appreciated, and we certainly take Tim at his word.

Fine. I'm sure Tim accepts your apology. Or, maybe he doesn't, if he reads the following:

Speaking of taking people at their words, here is a representative sampling (UPDATE 2:12 PM: Added disclaimer to pdf) of the offensive comments that were posted this week. We will leave it to our readers to judge for themselves what they say about Lamont's supporters and the Lamont campaign itself.

Are you JOKING? Just two paragraphs above, you said, "We in no way blame the Lamont campaign itself for this turn of events."

And THEN you follow that with: "We will leave it to our readers to judge for themselves what they say about Lamont's supporters and the Lamont campaign itself."

So Dan, which is it? Are you saying the Lamont campaign is responsible for this, or not?

Because, to me, it sounds like you're talking out of both sides of your mouth.

...and we're not going to let you get away with that.

UPDATE: Holy shit! Dan's "Greatest Hits from Joe's Blog" .pdf file may be the most insightful glimpse into the mind of Gerstein that has ever been posted anywhere!

This is a virtual gold mine of funny (and sometimes scatological) anti-Joe posts; a few pro-Joe comments labeled "naughty"; and several pages of explicit services performed by...er, "companionship consultants", some might consider them, that are informative and completely apropos of nothing.

While Dan tries to make a point with this 15-page .pdf file, after a couple of pages it just gets funny...and then funnier!

Dan, while I mourn the loss of the blog's comments (and I correctly predicted their demise as taking between 5 and 6 days; I only wish I'd started a betting pool!), your preservation of the best of the Joe's blog comments is admirable.

Aw, poor Joe. Everbody is picking on him. Its really sad when kvetching has become his primary political strategy.

It helps to keep people from thinking about his support of the war that's killing kids every single day.

Bob, first, I am glad I can post here.

Second, I wish I were a fly on the wall when Dan and gang have a look at the web traffic logs after removing the ability to leave comments. I have no reason to go back to that site and I am sure many others feel the same way.

The ability to comment on their blog was the best idea the Joe campaign has had in a long time. Short of disabling comments altogether they could have handled this in a better way. Simply requiring a valid email address would have eliminated most of the trolls.

Hack or not, they did not know how to handle the situation (lots of traffic) and now with clear lack of experience with blog software, it's clear to me that these guys are total newbs when it comes to the web.

Pulling back on the comment section was inevitable. I just hope the tech guys are looking for new jobs come November (hopefully not in IT).

carter, yeah I feel it was set up to fail, to give the Liebergang some cheap ammo to hurl at the Lamont camp.

It's sad and pathetic, and simply reflects how far from reality their philosophy actually resides.

So yeah, there's no real reason to go to the Joe2006 website; even the stupid calandar is next to useless, because it they won't post anything with more than 24 hours notice.

Gee, I wonder if bloggers with video cameras and hard questions had anything to do with that?

Is it posterity or one's posterior that thanks Dan?

Yes, many comments are blunt. Yes, many are rude and use bad language. But many comments also reveal how connected to the political scene the authors are as they refer to events not covered by the traditional media.

The Lieberman campaign staff are people that cannot use the Internet.

It's almost like some genius at the Lieberman campaign said, "Hey guys, let's start a blog! I hear all the kids are doing it these days, and it'll be a great way to reach out to the young people and get them to support Joe!"

And the rest of the staff agreed with phrases like, "Far out!", "Groovy idea!", "It'll be the cat's meow!" and similar dated expressions.

These guys don't get it so hard they've almost broken the time barrier. Soon they'll be receiving episodes of "I Love Lucy" on their computer displays; first run!

considering how little support schelisinger is getting, disliking joe probably means you will be voting, or supporting, ned lamont.