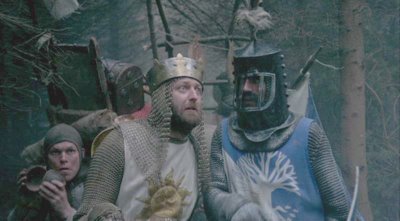 "NIE!" Ah, a Monty Python reference. That might be a first for this blog.

I think the look on Joe Lieberman's face when he saw the National Intelligence Estimate report on Iraq was identical to King Arthur's above.

This morning I'm sure Joe's "major speech" on Iraq has been going through frenzied, last-minute rewrites since the NIE came out. He has an 11:45AM deadline, since that's when he says he'll give the speech.

Funny, although his campaign has said they'd make the speech available in advance, I haven't seen hide nor hair of it.

UPDATE: Joe finally released his speech to the media, according to this article in the Hartford Courant online posted at 11:26AM, entitled, "Lieberman Says Troop Pullout Timelines 'Doomed To Fail'"

OMG, this is only your first Python reference?? For shame!! Excellent usage though...