From the Office of Secretary of the State Susan Bysiewicz
Thursday, September 21, 2006 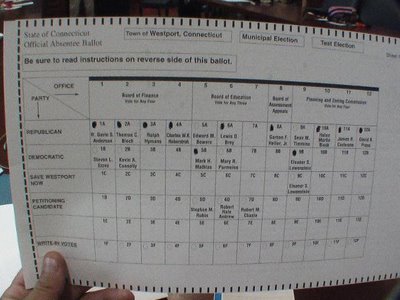 Secretary of the State Susan Bysiewicz said today that her office and the University of Connecticut’s Department of Computer Science and Engineering will perform random audits following the November 7th election in cities and towns using optical scan voting technology in place of lever machines. The audits will be done to examine how the machines worked and to ensure the reliability of Connecticut’s voting technology.

Secretary Bysiewicz said her office will work with UConn Computer Science Professor Alexander Shvartsman, whose department this year formed a partnership with the Office of the Secretary of the State to assist in certification and acceptance testing of the new voting technology, as well as the citizens’ group TrueVoteCT. These audits will be performed randomly in the twenty-five (25) Connecticut towns that will begin using the optical scan voting machines in place of lever machines this year.

“We are very grateful to TrueVoteCT and UConn for their guidance and expertise. These random audits will ensure that we are using funds wisely to purchase equipment that is reliable and accurate,” Secretary Bysiewicz said. “These audits are also a means for assuring Connecticut voters that each of their votes will be counted properly and that we will continue our tradition in the state of fair, secure elections.”

Dr. Shvartsman, who directs UConn’s efforts in this partnership, said, “Random audits will play a critical role in allowing the state to ensure accurate and secure elections. We look forward to our work with the Secretary’s staff and members of TrueVoteCT to develop procedures that provide necessary safeguards.”

Michael Fischer of TrueVoteCT said, "One of the recommendations that we have made for the responsible use of computerized voting technology is that the correct operation of the equipment on Election Day be verified through suitably designed random audit procedures. We are delighted that Secretary Bysiewicz is taking the initiative in establishing audit procedures for the new optical scan equipment in the upcoming November election."

Christina Spiesel, a board member for TrueVoteCT, added, ‘All over the country people are expressing grave concerns about new voting technologies. Connecticut can set the example for the nation about how to go about ensuring a secure election where everyone's vote is counted. I am very happy to see Secretary Bysiewicz exerting leadership in the proper use of these new technologies."

There's no denying that Connecticut will have to migrate to new voting technology, but it is encouraging to see that proper steps are being taken to ensure the reliability of the machines.

For background on this story, you can read about my previous articles:

We just had a fiasco with these down here in Arkansas. Our "powers that be" decided to skip verification. Now the whole state is afraid to vote.

bulldog, do you have an online source for that report? I'm compiling them for a future post. Do you know which machine model they used? The OS scanners that they're going to use in CT have paper ballots, so it's easier to recount/verify (although it requires looking at each ballot individually and recording the vote).

With all due respect, there IS denying that Connecticut or any other state has to switch to unreliable and easily circumvented electronic voting technology. While it's reasonable for the moment to trust our current Secretary of State, the voting fiasos in Florida and Ohio that are spreading to other states indicate that Secretaries of State have been complicit in promoting corruption of our ballot boxes. Audits in the hand of corrupt politicians can turn out to be not so random or objective - or even done. Audits are necessary, but they are not a sufficient control to ensure true democracy prevails.

There is an article in today (Sunday 9/24) New York Times on electronic voting machines and the problems they are causing, and the fact that many states are having second thoughts on their use.

I would like to know the specific, detailed emergency plans that CT towns using these machines will execute if the paper in the printer jams (on the printed paper ballots) or the machines fail.

All that has to happen to defeat the comfort Susan B has with these "paper trail" machines is to destroy the paper trail/jam the printers, or for them to jam on their own if the paper is loaded wrong. Next, Susan B will say, "too bad about the paper trail but we think the election was more or less fair."

Based on lessons learned from other states and mentioned in the New York times article, the Ct town using the new machines need to have printed and distrubted an emergency supply of paper ballots, or (a VERY poor second choice, but necessary), have a plan to re-route voters to other polling places. It will NOT work to come up with this on the day of the election.

If CT does not have a credible plan to address voting machine problems, then we should stick with the old lever machines for this election.

How much technical skill does it take to throw a wad of chewing gum or spill a soda into a voting machine printer? Oops!

The loss of votes in districts known to be favoring a particular candidate would be a away to throw the election.

I think that for reasons of perception and voter confidence, Susan B should commit a "sin of commission" and not use these machines unless and until she has thoroughly thought out AND PLANNED FOR what can go wrong and how to prevent it.

Are the volunteers who are going to work at the polls computer savvy? They HAVE to be this time around, as part of this plan, and I don't mean a quickie training session right before the election.

PS: "HOPE" is not a plan, nor is being dubious that there's an issue to resolve. I am reading about the Katrina debacle, and it's rife with people who didn't take the problem seriously enough till it was too late, or who had poorly thought out emergency plans.

Susan B announced that they're going to verify random machines to make sure the election is honest. Another thing she can do to help ensure the accuracy of the machines is to make sure they are carefully watched during their pre-election "sleep-overs" with the local voting official.

I agree it's a remote possibility, but there's not likely to be a significant "jamming" or "destruction" of ballots. The paper ballots are collected in a locked box under the machines, and they are checked against the paper printout from the tabulator.

The ballots won't be destroyed unless the Sec. of State's office is complicit in a major election fraud. And if that happens, we've got bigger problems to contend with than hackable voting machines.

The bottom line is that the paper ballots will be available for recount after a contested election. The best way to combat fraud is to volunteer to be a poll watcher. A large group of interested citizens who want to see fair elections can do a lot to ensure the correct outcome.

How unusual do you think paper jamming would be? Do you think 10 per cent is unusual?

"A growing number of state and local officials are getting cold feet about electronic voting technology, and many are making last-minute efforts to limit or reverse the rollout of new machines in the November election."

"...Their concerns became more urgent after widespread problems with the new technology were reported this year in primaries in Ohio, Arkansas, Illinois, Maryland and elsewhere."

..."You have to train the poll workers, especially since many of them are of a generation for whom this technology is a particular challenge. You need to have plans in place to relocate voters to another precinct if machines don't work and I just don't know whether these steps have been taken."

Next question: What is the protocol for resolving discrepancies in any audits of paper vs. electronic vote totals?

That question is raised in less detail by Prof.Richard Hasen of Loyola University in the article.

My questions: Is there a definite, codified margin of error that is considered acceptable or unacceptable and that triggers a full recount? Or is that up for political will-bending?


"...But even the systems backed up by paper have problems. In a study released this month, the nonpartisan Election Science Institute found that about 10 per cent of the paper ballots sampled from the May primary in Cuyahoga County, Ohio were uncountable because printers had jammed and poll workers had loaded the paper in backward."

"In Montgomery County, election workers did not receive access cards to voting machines for the county's 238 precincts on time, forcing as many as 12,000 voters to use provisional paper ballots UNTIL THEY RAN OUT (emphasis mine)."

In CT, what quantity of provisional ballots are being provided and/or are any of the old machines going to be there available to be used as backups if the new machines fail?

If turnout is high, even a small delay or limited number of machines breaking down can lead to big backups and big loss of votes.

What we must verify has happened in CT in our Secy of State's office is NOT that she has done a PR campaign to calm down nervous voters - it's to verify that there is an actual, detailed, well planned strategy for rolling out these machines and making sure all votes are counted.

There is a tendency these days to confuse reassuring the public with having a plan. That tendency is evident with the Iraq War, and with the handling of Hurricane Katrina, to name two of the biggest examples. In both examples, we now know that the public was repeatedly told one thing while another was going on, and to quite negative results.

It would be a disservice to act reassuring if there is not sufficient evidence that all legitimate concerns have been addressed.

In this article it discusses the recent Princeton computer scientists' hacking of an older model of the AccuVote using a generic mini bar or office furniture key to access the memory card and says that cmputer scientist Avi Rubin of Johns Hopkins suggets using one machine to record the vote, print out the and another optical scanner to tally it.

Does anyone know whether the recent Princeton hacking demonstration applies to the way in which CT is using the AccuVote machines? Is CT using the same machine to record and to tally votes?

You can look in the Democrat Gazette Archives, I'm not sure where else the story might be...sorry.