Gov. Rell's decision to support Catholic hospital's refusal to provide the Plan B pill to rape victims results in her losing the support of a major wonen's group.

Traditionally, a leading abortion rights group would endorse a socially tolerant, female governor who supports abortion rights and who is leading in the most prominent poll by 32 percentage points. In fact, the NARAL political action committee endorsed Republican M. Jodi Rell when she ran for lieutenant governor and for the state legislature.

But this year is different. 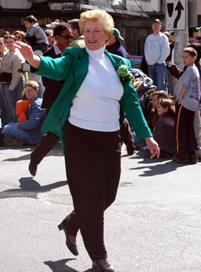 In one of the most controversial issues at the state Capitol this year, Rell opposed forcing Catholic hospitals to provide emergency contraception to rape victims. The Catholic hospitals opposed a bill to change state law, saying their religious beliefs would be compromised if all state hospitals were required to provide the morning-after contraceptive pill that is known as Plan B. Despite approval by the budget-writing appropriations committee, the full House and Senate never voted on the bill.

Rell's position on Plan B was a critical factor in causing her to lose NARAL's endorsement.

"That caused us a lot of concern because that was our priority issue this year," said Carolyn Treiss, NARAL's executive director. "She wasn't there for us."

Now if only NARAL will do something about their stupid continued support of conservative-pandering Samual Alito-non-preventing so-called moderate and soon-to-be-former Senator Joe Lieberman.
Posted by CT Bob at 9/18/2006 10:50:00 PM

I understand from Carolyn Treiss of the CT NARAL, their office here in CT DOES support Ned Lamont, it is the Federal NARAL who does not.

So make sure if you give any NARAL donations, it goes to the CT one, not the National one.

bergs, thanks for the clarification. Yes, CT NARAL has been good to Ned, but the national organization is apparently full of beauracratic dummies who can't see that Joe is toxic to women's issues.