This sure ain't gonna help Baba-booey! 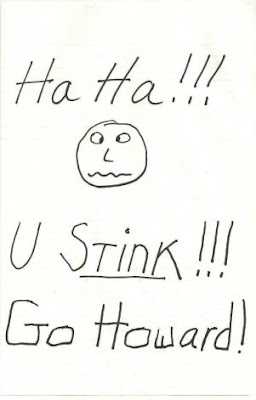 A Representative Town Meeting member who called Stern's satellite radio show offensive to women says she found a bag of fecal matter in her mailbox Sunday with an anonymous note attached.

"Ha Ha!! U Stink!!! Go Howard!" the note read, according to a copy provided to Greenwich Time by Coline Jenkins.

"On Monday, I will bring the bag of feces and anonymous note to the postmaster of Old Greenwich and file a criminal complaint, as it is a federal offense to tamper with the mail," Jenkins wrote to fellow RTM members of District 6/Old Greenwich.

I have some experience with small town politics, when after a year of exemplary service to the City as a member of the MGAT committee to help provide government access TV to cable subscribers, I was unceremoniously dumped from the committee by the Republican dominated Board of Aldermen. With no warning or reason given, and not even a word to the committee chairman that they were considering it.

So I'm sure I'll be able to sympathize with Gary if he doesn't get the position he's seeking.

There is a positive side here, though...

You and I make our own doody.

Tessa, remember that you're totally allowed to say "shit" on my blog.

And shitting the nest or the bed is definitely a no-no.

OK, I think we've got it all sorted out now.

How would tell the difference between what was in the bag and Howard himself?

Ah, but there IS no difference!

In fact, she could have said that someone left a bag of Howard in her mailbox! LOL

I am sorry to hear that it was subject to a tax. IE, not "doody-free"

ok Now I am done as well.