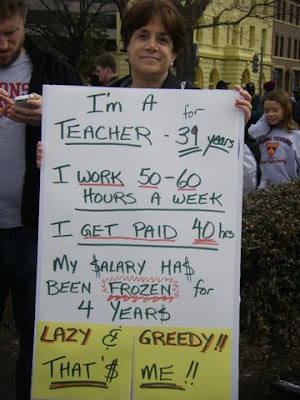 Just another typical lazy and overpaid union member, seen at the on-going protest in Wisconsin.

Meanwhile, Gov. Walker just stated today that the pro-union protests haven't swayed him in the least.

He's starting to sound like Captain Smith not long after the Titanic scraped the edge of that iceberg!

From the wartime OSS psychological profile of Adolf Hitler:

"His primary rules were: never allow the public to cool off; never admit a fault or wrong; never concede that there may be some good in your enemy; never leave room for alternatives; never accept blame; concentrate on one enemy at a time and blame him for everything that goes wrong; people will believe a big lie sooner than a little one; and if you repeat it frequently enough people will sooner or later believe it."

He reminds me more of Captain Queeg in the Caine Mutiny. Obsessing over the missing strawberries while clicking his balls together. Bogart played him in the movie.
oldswede

And they called him "Old Yellow Stains"...hmmm, sounds like a suitable nickname for a warhawk senator who used about a million deferments to get out of serving in Vietnam.

Cuomo has also promised — read his lips? — not to raise taxes, and has introduced what the New York Times editorial page calls a “radical” bill to cap property tax. Up to 9,800 state employees face layoffs under his new budget: that is more than six times more people than Wisconsin governor Walker has threatened to lay off if his union bill isn’t passed. . . .

Everyone with whom I do not agree is Hitler.

Milford teachers got a 5.5% pay raise last year. Seniors received a 0% social security increase, but their taxes did go up to pay for the teachers pay raise.