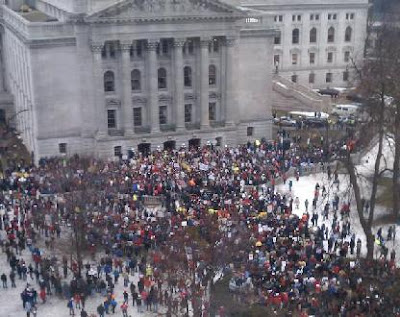 There is a huge protest going on in Wisconsin for the last several days, and it's becoming something of a showdown with anti-union Republicans.

My pal Melissa Ryan (aka Caffeinated Geek Girl) has been in the thick of things since this began. Her tweets are full of first-person insights and photos. Follow her @MelissaRyan. The photo above is from her Twitter.

Multiple outlets have confirmed that Senate Democrats in Wisconsin boarded a bus and left the state, denying the Republican majority the quorum needed to pass their budget repair bill, which strips away collective bargaining rights for public employees. Sen. Jon Erpenbach told WisPolitics that the Democrats were left with no choice:

Asked how long they were prepared to remain outside Wisconsin, the Middleton Dem demurred.

“The question is when are the Republicans going to sit down seriously with the other side on this issue and try to work something out,” Erpenbach said. “When are we going to be reasonable about this and slow things down?” [...]

Erpenbach said Republicans should look at how the proposed changes are tearing the state apart and realize a different path is needed.

This comes as protests continue to rage inside and outside the Capitol. The Department of Administration counts nine arrests so far, and as for crowd size, the same agency (conservatively) estimates 25,000 out in force, including 5,000 inside the Rotunda. Governor Scott Walker again threatened to call out the National Guard if the protests got “out of hand.” The Center for Media and Democracy’s PR Watch has live updates of the rally.

Wisconsin has become the critical start point for a much broader assault on worker’s rights and unions. Ohio has seen similar protests over a very similar bill. And states like Arizona, Florida, Indiana, Iowa, New Hampshire, New Jersey and New Mexico are considering additional limits on public employee rights, though not to the extent of Ohio and Wisconsin.

The origins, as I wrote about Monday, come from ALEC, the American Legislative Exchange Council, a key driver in the conservative movement. One reason why you see similar bills from Republicans pop up in multiple states is ALEC, which pushes an agenda for state legislators to pick up and run with. We know that ALEC brought together Walker and southern state Governors after the elections to discuss so-called “right-to-work” legislation. We know that ALEC commended Walker for his first successful piece of legislation, the bill slashing business taxes that created the budget deficit which he is now exploiting to take away public employee rights. They are basically behind all of this.

This fight could now play out over many weeks, depending on how long state Democrats – or the Governor – hold out. And I don’t think the working families rallying in Madison have any quit in them, either.

UPDATE: John Boehner has come out in favor of Gov. Walker in Wisconsin. Walker himself demanded that Democrats come back to work and allow the bill to move forward. Hosni doesn’t like it much when the people don’t obey his demands.

One-third of those surveyed last night said they backed Walker’s proposal to increase how much public employees pay for their health care and pensions.

Almost 27 percent said they believed public employees should pay more for their health care and retirement benefits, but Walker’s plan went too far. Another 35 percent said they opposed the proposal as “an attack on unions and Wisconsin workers.”

When told the proposal also included stripping public employees of their ability to collectively bargain on any issue other than wages, support for the proposal dropped slightly to just less than 32 percent.

Thirty-two percent said they supported the increased employee contributions, but thought the collective bargaining piece went too far. Thirty-three percent opposed it as an attack on unions and workers.

“Each of us is in a secure location,” he told me, confirming that they were not all together but were monitoring events on the Web and on Twitter. Larson refused to say whether he and his fellow Dems had left the state, as some have speculated.

“We’re going to be staying away until we hear that they are taking the right to organize seriously,” Larson continued, referring to Republicans. “They’re going after 50 years of history in one week. Until they take that off the table, it’s a non-starter.”

This isn't necessarily limited to international or even national events...a few weeks ago, Milford's Republican members of the Planning & Zoning Committee walked out from doing the business of the city rather than let a Democrat be elected for a second consecutive year as chairwoman.

But the difference is, this was simply a GOP partisan protest, instead of a fight for what's right. And the upside of all of this is that Susan Shaw won reelection anyway, just a few nights ago, with support from a lone Republican who was able to rise above simple partisan politics and cast a vote with the Democrats to put Shaw back into the chair.

So, when Egypt fights for Democracy; or Wisconsin fights for worker's rights, it's a good thing. When partisan Republicans fight for something just because...well, it ain't such a good thing.
Posted by CT Bob at 2/17/2011 10:31:00 PM

I think the country is going to hell in a hand basket quicker than we may think. Can't we just split the country in two? The cons can have their own country and the normal folks can have theirs. Why preserve the union when it's become so dysfunctional? Time for a divorce.

What I find really shocking is that no one has responded to this post regarding Wisconsin. Education workers rights is not as big an issue since everyone is hating on teachers these days. Seems to be the cool thing to do in politics.

However, it's being done with purpose.

1. Remove teachers with tenure and hire cheaper labor. Why pay a 20 year vet 70K a year when you can hire a new teacher for 32K a yr?

2. Privatize public education. (BIG Money to be had on the backs of taxpayers in this category) If I were a bagger I'd be pissed about this one. 100% tax payer funded proftis and they won't be going towards services like actual teaching and learning.

I truly like how the fire fighters and cops have stepped in and are defending the teachers rights to collective bargaining. I hope the teachers repay them when they run into this bullshit down the road.

The real deal is the push to privatize public education. The repugs are coming up with all kinds of ways to privatize public ed since their push for vouchers and charters is failing miserably. Get the pesky teachers union out of the way and corporations will swoop in and pick the bones dry. The unions are about the only thing preventing big business from doing such.