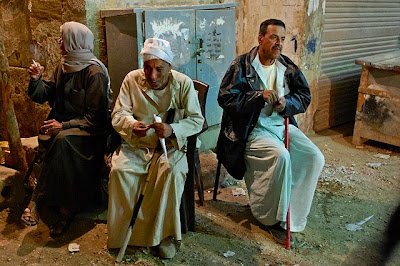 A frequent reader of my blog, Vagabondblogger (who took the photo above), lives and works in Egypt. For the last few weeks I've been very concerned about her safety. She wrote me via Facebook about a week ago (which I missed for reasons explained below) and today she posted a comment. I think this deserves it's own post, and I'd like to say that many people here are very relieved that she's safe and back home:

Hey! We were evacuated from Cairo on Tuesday and arrived safely in Houston late yesterday afternoon. The evacuation was more stressful than living in Cairo during the demonstrations. BTW, I messaged you on FB on Jan. 26(?), so check your messages.

(CTBob: Sorry, I totally missed it! I was in Newport for four days for my birthday, and my cognizant abilities were running very low, most likely due to excessive partying. My bad.)

I will say this, even after watching the news last night and today, my choice was to stay in Cairo. But, I was not given a choice. What you see on TeeVee is what is happening in Tahrir Square. I don't, as do many others, live in Tahrir Square. For the most part, the outer neighborhoods and suburbs are very safe, for the time being. The troublemakers are the plainclothes police and Egyptian Mafia (hired thugs.)

I have photos and was hoping to post some stuff on my photoblog: vagabondbloggersproject365.blogspot.com

You will notice that I haven't posted anything since last week, due to no Internet. And I have been busy since arriving in Houston.

Please be aware that what is happening in Tahrir Square is not happening throughout Cairo. Also, no kawagas (foreigners) have been hurt, except by Mubarak supporters, during these demonstrations. We feel safer in Cairo, than we do in Houston (gun totin') Texas.

With today's events of Mubarak having his thugs go after journalists (last I heard many were evacuated), I am concerned that we will see another Tianamen Square (the students should have plenty of phone videos though.) When we in the USA wake up EST at 6AM tomorrow, the mosques will be letting out from Friday Prayers, and it could very well be a very bloody day. I hope not. What that man has done to his country confounds and disgusts me. Egyptians are wonderful people, and I am very afraid for them.

Here's the Facebook message I missed from last week:

You expressed some interest previously about what's happening in Egypt. If you are still interested and/or want to pass on information here are some links:
Twitter: #jan25 and #egypt
Also: The Guardian's live blog:
http://www.guardian.co.uk/world/blog/2011/jan/27/egypt-protests
And a Mother Jones article, which updates daily:
http://motherjones.com/mojo/2011/01/whats-happening-egypt-explained
Also; Al Masry Al Youm News:
http://www.almasryalyoum.com/en
Egyptian Chronicles blog:
http://www.egyptianchronicles.blogspot.com/
and The Arabist:
http://www.arabist.net/

And finally, I'm heartened by Chris Murphy's tweet from a few days ago, since it shows that there ARE people in Congress who are deeply concerned about the situation in Eqypt:

I found this link, and it's awfully frightening:

Let me add some information regarding those TV scenes of American State Department cars running down people. On January 31 I heard about an hours worth of shooting coming from south of my neighborhood. When I went outside our boab stated it was coming from Toubra prison. As we have all heard the Mubarak regime released prisoners from several prisons in the Cairo and ALexandria vicinities. While I was outside I bumped into an Egyptian neighbor, who was toting a supply of litre Pepsis home. We were watching as people were packing up vans and leaving. He stated that those were American Embassy vans, and I should be careful. 15 American Embassy vans had been stolen the week before from the area around Tahrir Square (the embassy is not far from there.) He said thugs had taken them, were carrying guns, could be very dangerous and that I should not approach any of the vehicles, as they might shoot or kill me.

After living overseas since 1997, I can't possibly express how disgusted I am in the State Department. They are totally worthless, and should just change their name to The Chamber of Commerce. I'll just leave it there. I'd almost go so far as recommend we cut their budget. I really can't find anything useful that they do, except add extra pages to my passport.

Thanks for the b-day wishes. And also for your extraordinary commentary about the situation, which many Americans know only from CNN or FoxNews.

I've taken to watching Al-Jazeera online for updates, as it seems to cover the events with more clarity than the mega-news corporations.

And thanks for giving me another blog post. Your insights are certainly more valuable than anything I can think of to say about the situation!