So, my other blog is basically moribund, me not having posted there in over a year. And that's where I post stuff about entertainment, so this is where I'll now put stuff that I find interesting even if it's not politically relevant. We have three days before the New Hampshire primary and besides, we all know who's gonna win both contests.

Anyways, I was watching the second episode of "Mozart In The Jungle", the very good Amazon original comedy about the lives of symphony orchestra musicians in New York, when I noticed a particular transition shot they used that looked very familiar.

About two months ago Joyce & I spent a weekend in Manhattan, and while we were there we took the awesome Roosevelt Island Tramway, which runs from roughly 60th St. at 2nd Ave. to the island at about 18 mph. We went over at night, and I shot video (naturally) of the 3-minute trip.

As I watched the episode, I noticed a familiar skyline on one particular shot. The camera was "dollying" from the lower right to the upper left, which looked like a helicopter shot. Just as the Tramway does when it climbs out of it's Manhattan station. 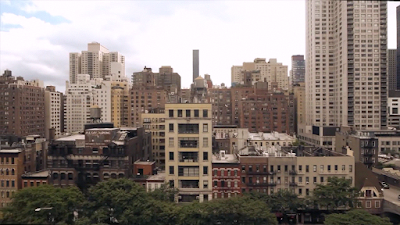 Immediately I thought "wow, that looks like the view from the Tramway!". I played the video file I had of our night crossing, and sure enough, there was the exact view as on the show, except for the time of day. 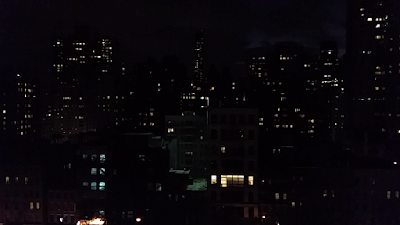 If you look at both pictures, you can see that obviously this was shot from the Tramway. And I think it's a wonderful and affordable way to get a spectacular helicopter or drone-looking scene at a fraction of the cost (a regular Metro fare, which I think is currently $2.75; although you get a free transfer if you got there via the subway like we did!)

On the night we did it there were tons of tourists just taking the trip for the view. We actually explored the island a bit (if you call getting a drink at a local pub and taking a couple pictures of the bridge "exploring"...and yes, that qualifies in MY book!), when we went to the station for the return trip we saw a tram car come in, and 90% of the people exited the car and immediately got in line for their return trip! Maybe a half-dozen people actually got off and left the station.

Which, I guess, is a function of the reality that the island has now has a Metro station that services the F Train. It's probably easier and quicker to take than exiting the subway in Manhattan a block or two away and then climbing a couple flights of stair to get in line for the Tram.

Here's the (nicely edited) video of our recent tram ride at night: