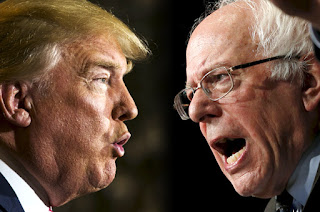 Looking at the polls in New Hampshire via RealClearPolitics, it appears Donald Trump can boycott as many GOP debates as he wants and still win by a comfortable margin.

RCP has an aggregate result of Trump getting 32.8% and leading the rest of the field by 21%. Rubio, Cruz and Kasich are vying for 2nd place with figures ranging from 11.0 to 11.8%.

If those numbers are true, Trump really CAN shoot someone on 5th Avenue and still take the primary!

In the Democratic race, regional favorite son Bernie Sanders has an aggregate lead over Hillary Clinton of 54.6% to 38.8%, which translates to a 15.8% difference.

Again, if those numbers are true, well, Bernie can't exactly SHOOT anyone on 5th Avenue, but he can probably shove someone lightly out of the way when trying to board the 6 Train while the doors are closing at the 59th Street station!

Better he probably should avoid doing anything like that, just to be safe.

UPDATE: What a difference a day makes! Sanders' lead over Clinton has jumped an additional 5 points since yesterday's aggregates. On the GOP side, Trump slumped (yes, it's fun to rhyme words) about 5% as Rubio and Cruz made gains. Interesting to watch the polls and try to anticipate where they'll be on Tuesday; and of course how much they differ from the predicted margins. Once thing that may play into the election is the weather. If there is a low turnout because of snow or rain, it may skew the numbers significantly, especially if the trailing candidate has an organized GOTV team. This may be fun!

In any case, it looks like the outcome of this contest isn't very much in doubt, and the race to the convention will heat up with the later contests this month, starting on the 20th and continuing as below: