Ya hear that, Republican birthers?

Your front-runner and winner of the Iowa caucus is a dirty foreigner.

I don't actually know if he's dirty specifically, but judging how reasonable all you dummies were about President Obama, I really don't feel like I'm varying at all from your treatment of him.

So you are all in favor of a guy who has a Cuban father and was born in Calgary, which isn't located in the USA, and categorically is in a real foreign nation.

Ted Cruz is a Canadian, and also possibly a naturalized US citizen, although I haven't seen his passport. Can we see your supposed US passport senator?

But as you Birthers have endlessly pointed out, the possibility that Barack Obama might have been born in Kenya (which has been repeatedly and firmly debunked, but that didn't stop you knuckleheads) would have disqualified him from being president. 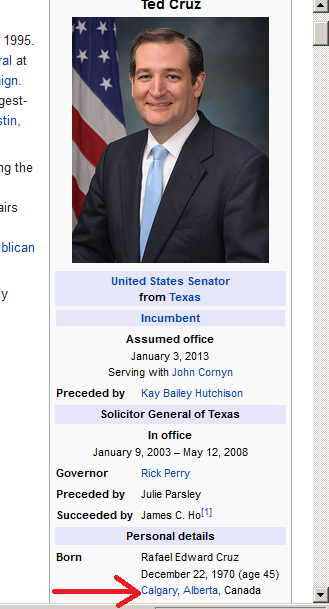 Welp, where are all you douchebags now that you've given a free-range Canadian a win in Iowa? In direct opposition to that glorious document you guys only quote the 2nd amendment from.

Check out the specific wording of Article Two of the Constitution:

I don't think there is any more obvious interpretation of this article except to agree that should one be born on foreign soil, they are ineligible for the office of the President. Sorry, but that's the rules.