And I'm sure CT Blogger won't mind me stealing this, seeing as he's off watching tennis at the U.S. Open this weekend while the rest of us bloggers are slaving away, trying to you know, save democracy and stuff...yeah, you go and enjoy your tennis!

(...and this coming from a guy who will drop everything at a moment's notice to go sailing! LOL!)

Anyway, it appears that supporters of Joe Lieberman are engaging in a despicable and unethical practice known as "push polling". Read this Letter to the Editor at the Stamford Advocate and see what I mean: 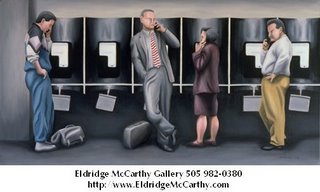 Poll was attempt at sneak attack on Lamont candidacy
Published August 31 2006
To the editor:

After about 15 minutes of what seemed to be legitimate questions about my voting intentions, the questioning veered into "if you knew this about Ned Lamont, would it make you more or less likely to vote for him," followed by various insidious accusations about his business practices.

Clearly, I was now on the receiving end of a push poll designed to create a negative image of Mr. Lamont. Throughout the previous questioning, I had expressed my firm intention to vote for Mr. Lamont. My eventual realization -- that I was the victim of a push poll -- caused me to angrily cut off the interviewer and finally hang up on him. (CTBob: "Bravo!")

I hope Sen. Lieberman is not involved in using this reprehensible tactic. I urge voters to do what I failed to do: Ask the caller to identify the name and address of the research firm he or she is working for before agreeing to participate in any phone survey.

Incidentally, my intention is even stronger now to vote for Ned Lamont.

It's most likely the GOP outfit in Salt Lake City. They are or were using the same sort of poll for Santorum against Casey in PA, just as described. That's where they told me they were from.

yeah, it's important to get specific corporate name and contact info in order to expose these people. With these kinds of tactics, we need to show the world their dirty politics.

Nobody EVER calls me! Sheesh!

Try dialing *69 after they call and see if that gets you back to the source. It might be interesting to hear how they identify themselves when they pick up on the other end.