(Check for "Comments" UPDATE below!)

I'm sure the net wizards that Joe hired were hearing the clock ticking like thunder as they let over 3/4 of the day slip away, but they managed to get their website up just under the wire. Congrats, people. Well done!

As I mentioned earlier, Kirby and I are going to refrain from posting on Joe's new blog, but we'll be commenting right here on the content and comments there.

But don't let us stop you from engaging in COURTEOUS, POLITE, and RESPECTFUL discussion over on Joe's Blog. Some of the comments are pure gold.

And keep in mind Dan Gerstein's promise to the people of Connecticut:

We are not going to censor comments from our opponents, unless they post obscene material.

You can see it here and on Joe's blog. No censoring unless it's obscene! Dan, I admire you for that.

Instead, we are going to use our free speech to point out any of the blatant lies or crude insults the Lamonsters post to call attention to the kind of negative, destructive politics that Ned and his followers like to practice.

"Lamonsters!" So, immediately Dan throws out the insults.

He does this in the SAME SENTENCE in which he decries INSULTS!

We're all about healthy discussion. But we do appreciate your sense of irony, Dan; no matter how unintentional it is.

Healthy discussion is something Joe wasn't that interested in until a valid candidate challenged what he sees as his God-given seat in the Senate.

So already we're seeing low-class plays on Ned Lamont's name. "The Full Lamonty", and "Lamonsters", appearing all over Joe's website. I was seriously hoping they wouldn't stoop to that level, and in fact, Ned Lamont's website has always given the opposition the courtesy they deserved.

But, just as Joe's grimace and stiff nod at Ned's polite greeting at yesterday's parade indicated, it looks like Joe Lieberman has let his Yale polish get scrubbed off by the friction of his relentless ambition to retain his Senate seat.

I fear that Dan Gerstein and Lieberman's "Rove-inspired" campaign staff will stoop to even lower depths before this is over. The "527 groups" are already making their presence known, and their agenda is "GET JOE ELECTED", no matter what.

I worry about how ugly they're going to make it. 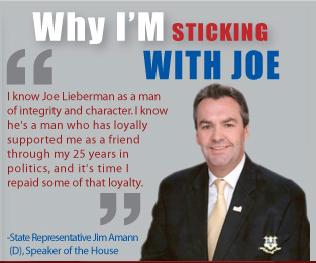 And then there's Jim and this thing. Tony Soprano would be proud of you, Jim Amann!

But you're an embarrassment to the entire Democratic Party and everyone who believes in the value of a vote. JOE LOST THE PRIMARY! Get it through your thick skull, Jim! He lost. It's over. Only through a loophole in the law can Joe even mount a campaign like this.

Why wasn't Al Gore given a do-over 3 months after the 2000 election? How about John Kerry getting a mulligan and having a new election in February 2005? Is THAT the kind of democracy you want, Jim?

Jim, do you realize that you're telling the majority of VOTING DEMOCRATS that you care NOTHING ABOUT THEIR OPINIONS?

Two people who have been around WAY too long...

It's time to elect officials who are in tune with the voters.

Anyway, you should all let Joe know what you think. But play nice.

COMMENTS UPDATE: So, now that Joe's blog has been up for a couple of hours, I've grabbed a few of the comments and posted them below, for your snarking pleasure.

(I just knew this was gonna be funny)

Nice website - did you guys pay the bill for the web server this time around?
reality-based educator

Congrats on the new blog Joe. Now go out there and beat those godless liberals senseless.
A Coulter

Yes, the new site and the new blog are just like joe-mentum. They're joe-notonous.
purplemountain

It's gonna be hard to take this website seriously when the "On the Issues" page has nothing about Joe's position on the Iraq War.
Dr. Dobro

Good job with the name calling Eric. You must be getting tips from my radio show. Keep up the good work and I can't wait to get my favorite "Democrat" back on my show.
S Hannity

sigh. i suppose no one will see this post either.
steve banks

Steve Banks, the word "sigh" is a well-known anti-semitic slur. You should be banned.
ykcir

And the spurious claims of anti-semitism are the most despicable elements of his painful performance. He has shown a real lack of class.
Pope Ratzo

Giuliani, McCain and Rice... terrific company to be in Joe. Welcome to the Republican Party, we're damn glad to have you.
John Gibson

I simply must commend Team Lieberman for the "Sunset" ad. It's worked better than any laxative I've tried, and I feel so calm now. Serene, really.
LiebermanForLieberman

I was posting at Joe's new blog, and the blog went down, at about 8:40. Then the entire new Lieberman site went down. Now Joe2006.com takes you to the old site.

It’s refreshing to have a candidate, a person of principle, emphasize the need for civility in the campaign. With that - and the old adage “actions speak louder than words" - in mind, do you not owe Mr. Lamont, the Democratic candidate, an apology?

You and your campaign staff, with no supporting evidence, falsely accused the Lamont team of “hacking” your website. Unfortunately, In the heat of a political campaign it is not uncommon to hear such unfounded accusations recklessly thrown at an opponent.

The fall campaign has now begun and we all look forward to a civilized campaign. Towards that end and as a matter of principle, your public apologize to the Democratic nominee, Ned Lamont is required, and, at the same time, you might thank him for having offered to share his website with you when yours went down - an extremely gracious offer on his part.
JR | 09.05.06 - 9:19 pm |

Hey Bob! Thanks for stopping by my blog!

I don't even know where to begin with the Lieberman blog. Who are these people that are running his campaign??? Seriously!

Bridget, thanks for dropping by!

Lieberman's total lack of internet and advertising saavy might be a good indication of a guy who's lost touch with the pulse of the public. Someone who might want to think about retiring while he still has some dignity.

Because he's sure as hell fucking up his legacy with THIS behaviour!

I'd almost feel sorry for Joe; but this week three more Connecticut kids had their next birthday cancelled. Maybe it's time to get out of fucking Iraq.

Seems they decided to put something up on Iraq finally.

I'm happy you are commenting on Joe's blog as I am an inept internet user and can't seem to figure out how to get into it. As I have no idea what "AIM" means and have neither a Yahoo nor MSN acct. Any suggestions? I just don't understand why they made it so difficult for the internet impaired to get into the blogs -- that's a large number of us, methinks.

Also, funny to see on dailykos that they picked up a spelling error in Lieberman's name after the ridicule Lamont received.

Thanks for giving insight into the loser's blogosphere.

gchaucer, you don't need AIM to get into Joe's blog. Just click on this:

...and that SHOULD take you right there.

Or type this in the address line in a new browser window:

Not all browsers seem to work with Joe's new website. They probably have some programming glitches they need to work out. Good luck.

Projects..Projects..Projects.. If you are like me it seems like there is never enough time in the day.. You get home late and leave early.. then the weekends thats another story by itself. My wife has found it easier to hire somebody if you we need help with remodeling ideas. She fond a great site for remodeling ideas at http://remodelinghelp4u.com and wanted to share it with you.. Im glad to find help when I need it..