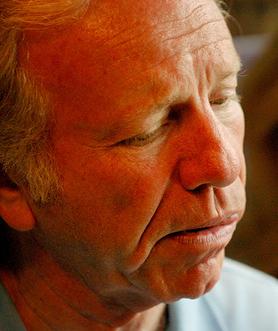 In 2003 Joe Lieberman spoke in strong terms about his opposition to the Prescription Drug and Medicare Improvement Act.

This is the act that is widely criticized for creating the Medicare "donut hole", in which seniors get benefits up to $2,250 for the year, and then they stop. Seniors must THEN pay the next $2,850 OUT OF POCKET before their benefits kick back in.

As a nation, isn't it tragic that we don't take care of our elders?

How many seniors on fixed income have that kind of cash available to them? Their choices are to sell off whatever possessions they have, or to go without their medications. They're not going to pay for their medications by getting a job as a "greeter" at Wal-mart.

Joe Lieberman made a big thing out of his opposition to the act, and even promised to vote against it in this press release the day of the vote. Here's the Senator's own words:

"I cannot and will not vote for this bill, and I urge my colleagues to do the same."

Nice grandstanding there, Senator. But wait until you see what really happened. Just look at the Senate Voting Record for that bill, and see where Joe actually fit in:

Just in case you didn't look at the link to Lieberman's press release above, here is the very first line of the statement:

"WASHINGTON - Senator Joe Lieberman (D-CT) today cast his vote against the Medicare prescription drug bill conference report, charging the President and Republican Congressional leadership with manipulating the bipartisan compromise reached in the Senate in June and inserting provisions that would weaken Medicare and harm America's seniors."

Rather than correct this falsehood, Lieberman allowed it to stand, and he continues to propagate this ruse on unsuspecting seniors who believe him when he says he voted AGAINST the bill.

Rather than use his "leadership" to force a closer vote and perhaps prevent the bill from passing, Lieberman couldn't even be there to cast a vote. Is this what Joe is talking about when he squawks about his "leadership"?

Hey Bob, can we use Al Franken's "L" word yet?
So. McCain was in Danbury stumping for "Not very good with the facts when it comes to her own voting record" Nancy Johnson. And they all want to "reach a compromise" with Chimpy on torture. Disgusting.
We need a clean sweep in CT this upcoming election. No more morally repulsive congresscritters. Just say no to waterboarding.

how amazing is his statement against the bill, but doesn't even bother to show up to vote against it! This is by far the most perfect example of Actions speak LOUDER than words!!! I wouldn't be surprised because he's lied about this fact so much that he actually believes it, and that's even more dangerous than lying!

How long before Lieberman scrubs that press release? Get a screen capture.

I hope some of you have been writing letters to editors with these facts ! Don't expect people to see it here.


Get this info out.

berg, I agree with you, and you'll be happy to know I've written many letters and have had a fair amount published in the various local papers! So, I'm not just writing comments on the blogs, I'm actually doing what I can to alert the general public! In between getting involved with phone banking and GOTV efforts!

bergs, yeah I think the campaign and the Lamont-supporting blogs are hammering the media with this one. But a few LTEs from our readers would help, too.

Hmmm...I think I'm going to find out how to add a Letter To the Editors link to the blog, so folks can simply click on a link to email their favorite media sources after reading an article here.

Anyone know how to do that?

Also interesting about the McCain visit to Danbury -- when asked if he was supporting his "good friend Joe Lieberman," he said, no, he was fully behind Alan Schlesinger. (!!!) Guess he didn't get the "sit this one out" meme.

I think we should send $2,850 (maybe less) worth of donut holes and box of Joe's to Lieberman's headquarters on Friday, National Donut Hole Day. It would be great, we could get the press involved and highlight what "No-Show Joe" is really about. Leave comments if anyone is interested.

I think you're missing the point.

LOL, best picture ever. A photograph really can speak a thousand words.

Yeah, I really like this picture. From the courant.com online edition, Lieberman slide show. It's a cropped image originally showing Joe and his wife looking very defeated.

I didn't want to portray Haddasah like that, so I close-cropped Joe's face. Really says a lot.