Apparently there is a serious outbreak of a new computer virus across the Internet, known as the "Lieberman Virus". The latest victim is the website of Minnesota Republican Mark Kennedy. (Click on any image to enlarge it) 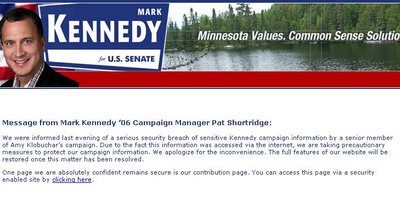 From the official Ned Lamont blog:

The front page of Republican Senate candidate Mark Kennedy’s (MN) website now reads … actually, just visit it. You’ll have to wait for some photos to load, but it takes you to a single message from Kennedy’s campaign manager accusing the Klobuchar campaign of compromising the security of their website. Of course, they point out they are certain one page is safe … the contribution page. How funny.

Gotta hand it to the Republican Party; when they see a campaign strategy that works, they waste no time replicating it.

How’s that hack investiation going, btw? What a positive campaign based on the issues… be proud. Very proud.

The best part is, if you click on the link to Kennedy's website above and quickly hit the Stop button, it catches it before it redirects from the original webpage. I captured the code below, and there is an obvious line edited into it from their web designer, which says this:

"...remove refresh when kennedy wants to get site back"!

By the way, this isn't hidden/secret information; ANYONE can view the webpage code of anything that appears on their browser. All you do is click "View" and "Source" or "Page Source" (in Internet Explorer or Firefox, anyway...I don't know about other browsers). Here's an actual screen cap of their website code: 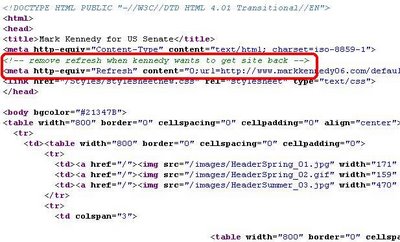 And just to show what they consider too secret to show you, here's a screen cap of their regular webpage: 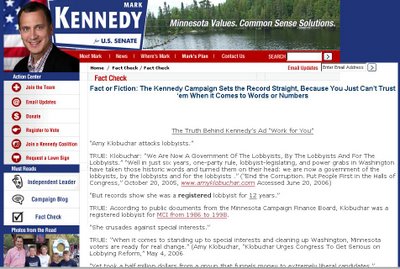 There's no doubt this is something that Kennedy's campaign did to their own website, on purpose, and then blamed their opposition for it. A detailed overview of the controversy is located on the DFL Senate Blog.

Also covered here at the DFLSenate blog. A review of our coverage is available in this overview post.

Wow. How low can these slimeballs go? Pretty damn low, I guess. rove is proud.

Thanks MRW - I'll put in a link to the overview. Good work.