OK, I'm willing to assume that most reporters are intelligent, attentive, and conscientious people who do the very best job of which they're capable.

I just don't know how many of them were at Naples Pizza today. 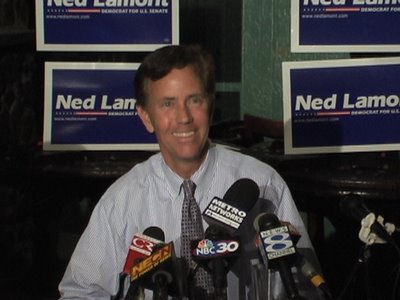 By my rough count while watching the raw video footage of the talk, the Q&A, and the sidewalk questions, Ned was asked at least 14 times if he supported either an immediate pullout of Iraq or an absolute, unchangable July 1st, 2007 deadline, as Joe Lieberman interprets the Kerry-Feingold Amendment; which was voted upon and defeated months ago.

Ned patiently explained his position. Over and over.

I'm getting the impression that a reporter doesn't think a question is valid unless he or she is the one asking it.

I don't know if I'll ever get used to hanging out with these people.

So, after hearing the same question repeated ad nauseum, I was ready to clunk a few of the reporters heads together like The Three Stooges.

Sheesh. I was SO upset and frustrated at the redundant, insipid questions that I needed to calm myself with a tasty lunch at an Indian restaurant.

And Branford Boy was buying.

(OK, I wasn't that upset...I was just hungry; thanks Kelly!)

(And somebody tell Mark Davis that I was just kidding)

Bob, good thing you were there to catch everything on video! Who knows what these reporters will write up, but it was VERY clear what Ned said, and I loved his remark about Joe being AWOL on the key votes! Thanks for being there!!!!

Well you just don't unnerstand pole ticks, bob. See, it's fine for the Repukelickans to spend 5 years screwing up in Iraq, a country that never attacked us.

But a Demoncrat has to explain EXACTLY HOW he's going to fix this Repukelickan mess, or else he doesn't deserve to be considered for public office.

Great vid Bob, though we expect nothing less from Bob-TV! OK, the questions repeated 14 times [I do think they want 'contiguous' footage of 'their' question w/answer] . However, each response from Ned gives carries an additional nuance or 'minor' point showing knowledge of detail; IMO a possible advantage in the 30-second-soundbite wars. He is damn good.

A brain dead media is part of the problem as to why our country is so screwed up and mired in this war....

This is true on both the national and local level...

And yet another day I am so proud to be associated with this blog. Great job, B!

"So, after hearing the same question repeated ad nauseum, I was ready to clunk a few of the reporters heads together like The Three Stooges," says Bob.

Do I smell a Connecticut Bob video production with a Three Stooges soundtrack in the works?

"Smell" is the right word for it! LOL

Can someone get the media some Q-Tips! Wax buildup in the ear or something?

Kudos to Ned for patience, I would have snapped after everyone asking the same damn question over and over again.

CT Bob -- great video, and I love the comment overlay. You have to wonder what was so hard to understand about what Ned was saying. Once should be enough. But then, the reporters are being fed so much misinformation by Lieberman's speaches and Gerstein, it's no wonder they need to hear the answers four and five times.

Great work. And the MA gang will be down again to help in a couple of weeks.

Scarecrow, that'll be awesome to see you back down here. As crazy as the primary was, I'm actually losing sleep worrying about how insane it's bound to be for the general election.