"Vets for Freedom" Fight for Rove and Lieberman

Yes, thank you so VERY much, Senator Lieberman

At 10:15 a.m. today, Connecticut veterans will ask Senator Joseph Lieberman to denounce "Swift Boat" style ads being run on his behalf by a 527 group. The veterans will make an announcement and sign an oversized letter to Leiberman on the north Capitol steps.

An organization with ties to Washington lobbyists, the Bush administration, and the Swift Boat campaign is coming to Connecticut with massive television ad buys for incumbent Senator Joseph Lieberman, prompting Democratic US Senate nominee Ned Lamont's campaign and supporters to call on Lieberman to ask the group to remove themselves from Connecticut politics.

Vets for Freedom, which will spend between $75,000 and $100,000 in two days this week, has ties to the Swift Boat campaign and is receiving advice from Republican lobbyists and strategists, including a former Bush spokesperson. They have said they plant to air more commercials and to continue until the election.

Several Connecticut Veterans today, joined by Campagin Chairman George Jepson, called on Lieberman to denounce the current ad, and any future ads but the group, signing a letter on the steps of the Capitol.

"These operatives have been shown to use the lowest kind of Rovian campaign tactics, and their disregard for the truth should give Connecticut citizens great cause for concern," said Lamont spokesman Liz Dupont-Diehl. "We call on Senator Lieberman to urge them to get out of Connecticut politics - and to pledge to run a campaign based on the facts."

The New York Times reports that "Vets for Freedom" is receiving advice from Taylor Gross, a former White House official; Bill Kristol, the editor of The Weekly Standard; Republican strategist Dan Senor [and] Mr. Lieberman's former chief of staff, Bill Andresen. (9/2/06) Most of these men are corporate lobbyists and Republican Party operatives.

(CTBob: I wonder how many of these guys are veterans? I think I can guess...) 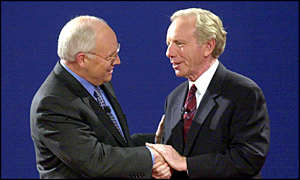 The Republican lobby group Vets for Freedom is the 2006 equivalent of Swift Boat Veterans for Truth, the Republican 527 committee whose attack advertisements in battleground states helped sink John Kerry in the 2004 presidential race by smearing him as a phony war hero and a traitor to his country.

Vets for Freedom (VFF) made lame claims to be "non-partisan" when in early 2006 it first appeared out of the blue online and in op-ed pieces in the New York Times and other major papers and in TV interviews. An investigation of the group by citizen journalists at SourceWatch and by the Buffalo News blew the VFF claim of non-partisanship out of the water. For instance, the Buffalo News revealed in June that former White House flack Taylor Gross, who left Scott McClellan's office in 2005 to start his own PR firm, represented VFF and pitched them to papers as non-partisan journalists who would embed for these newspapers and report accurately and cheaply for them from Iraq. Now the camouflage has fallen completely off. Vets for Freedom has registered itself as a 527 committee and is going to run a full page advertisement in Connecticut's Hartford Courant on behalf of Joe Lieberman's renegade run for re-election to the US Senate as a 'stay the course in Iraq' candidate.

The Wall Street Journal reports that VFF is being handled now by Republican strategist Dan Senor and that it "hopes to run other print and radio ads in the fall, and is also planning on campaign door-to-door for Mr. Lieberman and holding a rally on his behalf."

Connecticut is a heavily Democratic state, and normally any Democrat who wins the nomination would be expected to cruise to victory in the general election this November. However, Lieberman's refusal to bow out after losing to Ned Lamont in last Tuesday's primary creates a window of opportunity for a Republican victory. By supporting Lieberman, the Republicans hope to split the Democratic vote so that their candidate can get elected. This strategy is bound to produce an ugly and divisive political campaign, another advantage for the Republican cause nationally as Tony Snow and others in the White House paint pro-peace Democrats as a party of appeasement in the war on terror.

White House strategist Karl Rove has made clear his strategy for Republican victory in November is to run on the war in Iraq. For him VFF and similar groups such as Melanie Morgan's PR creation Move America Forward, are weapons on his political chessboard. Rove phoned Lieberman on Tuesday as Democrat voters were turning thumbs down on Lieberman for his pro-Bush cheerleading on Iraq. Karl Rove denies he offered help to Lieberman, but the battlefield arrival of VFF shows that Republican troops for Lieberman are already on the ground and firing at will.

Hey Bob, Just how much caffeine did you drink this morning? Fabulous job!

"By supporting Lieberman, the Republicans hope to split the Democratic vote so that their candidate can get elected."

Is this guy out to lunch or what?

It was an older article, so I'm not too surprised at that.

And beside, by supporting Lieberman, they MIGHT get their candidate elected.

Thanks for the post, Bob; I was one of the veterans who signed the letter, which I delivered to Senator Lieberman's office (Frank Rowe) this morning after the conference.

I'm saddened and angered by such a blatant Rovian effort.

Thank YOU for making the effort and standing up to this blantant interference from the White House in a local election! Well done.

You're welcome. Now, back to work! I'm sneaking up on the idea of organizing some veterans for Lamont in the HArtford area; anybody interested?

JohnieB, send me your email address, and I'll ask around. I know there are veterans who marched with Ned on Monday who may be interested.