Dudchik is doing it again 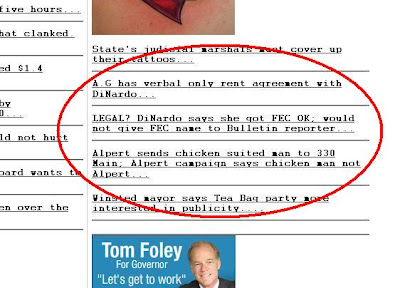 UPDATE: Stephen Herron over at Drinking Liberally in New Milford is seeing the same thing happening in the news aggregator website. Go over and see his take on the subject through the link above.

Above is a screen cap from yesterday's Capitol Report main page. The red oval shows THREE headlines all pointing to the exact same story, which happens to ask questions about the lease agreement Attorney General Dick Blumenthal has with Democratic State Central for office space.

I can see one headline being required to bring attention to this essentially pointless story. Yes, they probably should sign a lease, even though State Central doesn't even own the building; it's a sublet. Thank you Norwich Bulletin for pointing that out.

Maybe even two headlines, because the story also briefly discusses Merrick Alpert's silly "Chicken Dick" campaign to get another debate. Which, by the way, isn't helping Alpert at all, and in fact is making him look like a joke candidate. I liked him better when he stuck to the issues.

But three headlines? I mean, c'mon Tom! I know it was a light news weekend, but couldn't you put in a story about the Huskies women in the NCAA Final Four last night, or maybe link to the tragic story about the 19 year-old local Marine who lost his life in Afghanistan?

Does anyone really need THREE links to that same story?

It just seems to me that any story which raises any vague doubts about the Democratic candidate often appears to get more (and longer) coverage than stories that detail actual GOP shenanigans.

I think the Alpert campaign has long outlasted its usefulness or purpose, but as a Democrat, the errant behaviour of our State Party is infuriating. One cycle, the party gets behind Joe Lieberman in a big way; the next, they say that they don't endorse in primaries (even when Lee Whitnum is on line B); this time out, they're renting office space and sending out fundraising solicitations on behalf of Blumenthal despite there clearly being one (or more) primary challengers.

We deserve some consistency and transparency. And Alpert should run for State Rep or something instead of US Senate.

Alpert probably should have set his sights lower when Chris Dodd announced his withdrawal. By staying in the race after someone like Blumenthal has entered tells me that he's driven by more than wanting to replace a "DC insider". You might not like Blumenthal's style, but there's no way you can accuse him of being an inside-the-beltway politician.

State Central leaves a lot to be desired when it comes to messaging and taking the lead. I'm sure they do good work fund raising and such, but that ain't the whole job. I can't remember the last time I received a timely or important press release from SC.

Nothing like reading the comments section, and hear CTBob again, after reading an article full of CTBob. With a change of opponents, often strategy changes. I have yet to hear Alpert call Blumenthal a "D.C. Insider" in fact, I have heard him call Blumenthal a few other things, including incrementalist, someone out of touch with the constituents,and someone who doesn't take a stance on issues. I think that Alpert should keep his head high and keep going for the U.S. Senate seat. Furthermore, I find that the articles are important. It draws attention to what is happening in Connecticut politics. Mr. Blumenthal is considered the heir apparent to the U.S. Senate throne, by state central and your blog- so apparently it is a non-story. But for a political science student like myself, I find it to be an important story that needs exploration, specifically if the democratic process is not being upheld. But, what the heck- let's throw the democratic process and, while we're out it, the bill of rights, which gives you the ability to write this blog, out the window and we will just enjoy a dictatorship. I'm glad your views are so inviting.

Dude, I gave Alpert more coverage than pretty much any other blog in the state, ever since he announced. I'm sorry if my not agreeing with him 100% of the time is so upsetting to you.

I'm not crazy about Blumenthal, and I won't lift a finger to help him win a primary. But so far no candidate has given me a single reason to vote for him/her in this year's senate race except for Chris Dodd. I will, however, vote for Dick if he's on the ballot in November, because he beats the alternatives (Linda McMahon or Rob Simmons).

But really, it doesn't matter what I, ctpolstudent, or CT Bob think. If Merrick Alpert is not able to convince a majority of Democrats to vote for him in a primary, he's not going to become a senator. More importantly, the convention is next month. Has he started circulating petitions in order to have a primary? Does he have enough delegate support to force a primary? Merrick should stop worrying about Dick Blumenthal and start worrying about getting people to vote for him...the rest will take care of itself.

Lastly, ctpolstudent, if you find the lease agreement story to be of such great importance that it needs more exploration, write a dissertation on it. It would certainly be more productive than coming here and accusing CT Bob of throwing the democratic process and the bill of rights out the window when he points out that Alpert's campaign strategy is ineffective.

True, there's no in hell that Merrick will garner 15% of the delegates to force a primary, so his only option is to start gathering signatures from registered Democrats to get a spot on the primary ballot.

Or, he can try to pull a Nader and collect enough signatures to get on the November ballot as an independent candidate and essentially work as a Democratic spoiler.

But for a guy who prides himself as being a Democrat, he probably wouldn't stoop that low. Soon, no later than soon after the convention anyway, he should consider giving up his doomed crusade and throw his support to Blumenthal. At least that way, he'll stand a chance of having a political future in this state.

Aww shucks, Bob... Thanks for noticing. :) But I probably would not have noticed if you hadn't been following this regularly.