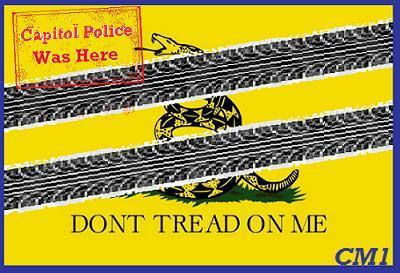 I just found out that the Capitol Police reversed their decision to allow the Tea Baggers to fly the famous "Gadsden Flag" which, while it's a hallowed Revolutionary War banner, was intended to represent their highly partisan and extremist cause.

Bravo to Acting Capitol police Chief Walter Lee for making the tough call to stand up and prevent the State Capitol from being used as a propaganda tool.

Stephen Herron over at Drinking Liberally in New Milford has more, including that awesome flag graphic above. Also visit My Left Nutmeg for additional views.
Posted by CT Bob at 4/08/2010 03:48:00 PM

I suspect that even the Tea Party supporters didn't think their request would be granted...but this flip-flop just gave them added ammunition.

"Don't Tread on Me", the Gadsden flag, named after Christopher Gadsden who surrendered the city of Charleston, South Carolina to the British in exchange for "parole" for himself. After the Revolutionary War, Gadsden retired to a farming and a slave trading business.

You serious Mike? It is a tribute to a coward and a slave trader's flag? I may have to rel@@k at the history of it.

Wiki does not note any of that stuff but I suppose I should be looking at some college level history books or digging at the library in order to get a fuller picture of the history of the Gadsden flag?

Wiki "Christopher Gadsden" instead. He appears to have sacrificed his own freedom to ensure Charleston's survival:

"When the British laid siege to Charleston in 1780, John Rutledge, as president of the council fled to North Carolina to ensure a "government in exile" should the city fall. Gadsden remained, along with Governor Rawlins Lowndes. General Benjamin Lincoln surrendered the Continental Army garrison on May 12 to General Sir Henry Clinton. At the same time, Gadsden represented the civil government and surrendered the city. He was sent on parole to his Charleston house.

After General Sir Henry Clinton returned to New York, the new British commander in the South, General Cornwallis changed the rules. On the morning of August 27, he arrested about 20 of the civil officers then on parole. They were marched as prisoners to a ship and taken to St. Augustine, Florida. When they arrived, Governor Tonyn offered the freedom of the town if they would give their parole. Most accepted, but Gadsden refused claiming that the British had already violated one parole, and he could not give his word to a false system. As a result, he spent the next 42 weeks in solitary confinement in a dungeon at the old Spanish fortress of Castillo de San Marcos. When they were finally released in 1781, they were sent by merchant ship to Philadelphia. Once there, Gadsden learned of the defeat of Cornwallis at Cowpens and withdrawal to Yorktown. He hurried home, to help the restoration of South Carolina's civil government."

The Capital Police are the Democrats new preferred go to group to stifle free speech.

Oh how the world has changed. "Fight the power" now refers to the Democrat machine. Liberty and freedom are not a gift from the government. As Bob Marley said: Getup, stand up, stand up for your rights.

You are free to go to the Capitol steps and say anything you want.

Just because the State won't sanction a Tea Party Political event does not silence anyone's right to haul their hypocritical butts up on soap box and yell their right wing crazy at passersby.

The state and its resources are not there just to sanction YOUR personal political candidates and fringe agenda but to represent everyone. Including the majority that disagrees with you.

Hey Connecticut Man1 you are wearing a military uniform while trying to make it difficult for citizens who you call a fringe (you don't read pools) group to be heard. You advocate for the police to be involved in those decisions. This does fit a certain political philosophy. Open your eyes.

They have freedom of speech and they can be heard clearly. They get more coverage in the media than they deserve given that they are as fringe as the socialists they decry.

My eyes and ears are wide open. I have heard them clearly and I disagree with their radical solutions. The Tea Party's radical answers are even more alarming and ridiculous than simple socialist solutions like the socialist military, socialist police and fire departments, socialist libraries, socialist parks, socialist government systems like our government paid politicians and programs like Medicare, Social Security that we already have and are needed for a functioning society.

In fact our social safety nets that are needed in a functioning thriving Capitalist society need to be expanded.

And I advocate that the police should be neutral to political speech, as should the government. They should neither stifle a political movement from gathering and speaking their mind, no matter how radical groups like the Tea Party are, nor should they give the appearance of supporting them.

You want your radical Teabagger flag flag at the state Capitol? Carry it there and wave it around all you want but don't expect the government to push your Teapublican agenda for you.

That ain't there job and that is not what we pay them to do.

Well Connecticut Man1, I disagree with some of what you have said, but fair enough. You took the time to answer and you are civil. I'll settle for that.