Just to show you our little city hasn't lost touch with it's puritanical roots, here's two stories that got a little play this week.

Frank Juliano of the CT Post reports in this story:

Back in 2004, when the ordinance was passed by the Board of Aldermen, it was hailed as the toughest in the state. The measure requires dancers and patrons to remain at least 6 feet apart and prohibits performers from going from the stage into the audience.

But the rules are not being enforced while a complex federal lawsuit drags on. No hearings are scheduled in the case, in U.S. District Court in Hartford, and the city's legal expenses have topped $258,000, officials said this week.

Daniel Silver, the lawyer for Keepers Gentlemen's Club, called the case "an expensive quagmire" last week. "We've got years to go and there is a lot of money at stake," he said. "I wouldn't be surprised if the city's legal fees topped $500,000."

So, our city's tax dollars (to the eventual tune of a half million) are going towards keeping the gentry safe from boobies.

The story goes on to describe regulations regarding "turgid male organs", but I decided it wouldn't be appropriate to discuss the subject on this, the most holy of Christian holidays.

Speaking of keeping the town safe from boobies, Milford also responded to a complaint about a painting on public property that depicts a tasteful rendition of a lady with nary a stitch covering her lovely bosom.

I've included a censored image of the painting below, with a warning bar that means "Not Safe For Public Property". 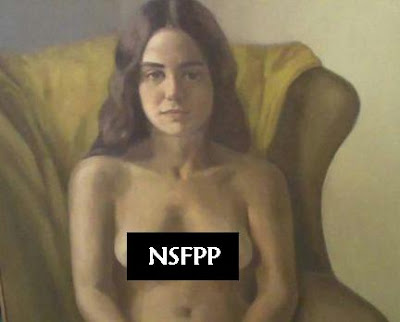 Several paintings of nudes, including one by noted artist Roger Van Damme that was installed in late February and one by Meddick that has been hanging for more than 20 years, were removed from the Parsons Government Center three weeks ago.

What's next? Are we gonna bring back the witch burnings?

I really don't need to comment further, except that I look forward to the flood of Google Image Search hits I'll get later today because I named the picture "boobies.jpg"!

Hmm. Sounds like you're living in an Islamic republic, where no nudity what-so-ever (even works of art) are allowed.

There are certain parallels, no doubt about it.

The complaints about the paintings were made by city employees. If female they could easily file a number of charges related to sexual harrassment, the most likely being that the city has created a hostile working environment. If that occured all we would be hearing is how stupid the city was to allow them to be displayed.

The removal was from the city government building. They have since been displayed in the Milford arts center. hardly a case of nude art works being banned.

As to making references comparing this situation to life in an Islamic Republic, that along with those who claim nazism or communism over things they don't like, only makes light of the people who have suffered under totalitarian regimes.

There is nothing that makes Americans look so petty and spoiled as to equate their lives in the U.S. with oppressed people over the centuries.

Is that Oil Painting at least 18?

Nonpartisan: I meant that tongue-in-cheek, and just an FYI: I currently live in Cairo, Egypt; lived 6 years in the UAE where flickr is blocked, books are banned, and no one complains for fear of arrest; and 3 years in Baku, Azerbaijan, where dissenters are bludgeoned to death, so I am fully aware of what living in an Islamic republic is like.

Vagabondblogger: My apologies for overreacting to your comment. My concern is that Americans of all political stripes throw around these comparisons and actually mean it. The vast majority of them are ignorant and spoiled.

Nonpartisan: I totally agree, and sometimes my sarcasm / cynicism is taken the wrong way (believe me, I seem to have foot in mouth disease more often than I like.)

The vatican was once a rougue place, then a new pope came in had all the genetalia chisled off the statues and paintings as well.

Today we have the infamous "Fig Leaf"

Perhaps Milford should consult with the Vatican and hire their artist.