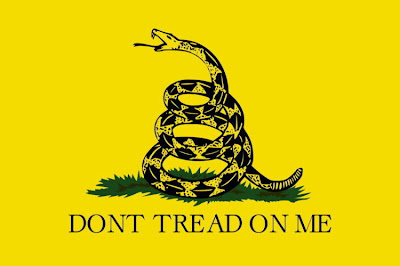 Tomorrow the Revolutionary War era flag known as the "Gadsden Flag" will begin being flown over the State Capitol, according to the Hartford Courant. The flag has been appropriated by the tea baggers and perverted as a symbol of their extremist views and far right policies.

On Friday, the flag will fly over the state Capitol — and that doesn't sit well with one veteran lawmaker.

"Generally speaking, most people would agree the top of the Capitol is not the place for partisan political flags," said state Rep. Michael Lawlor, a Democrat from East Haven and co-chairman of the legislature's judiciary committee.

Of course it isn't the place for it. However, someone who made that decision may be so enamored with the extremist views of the tea baggers that they'll allow them anything they want to spread their message of intolerance and extremism.

"It is within the parameters set within the policy," said Walter Lee, acting chief of the Capitol police department. "It is a recognized military flag."

It may be a military flag, but if you don't acknowledge the obvious partisan reasoning behind this usage, you're either being intellectually dishonest, or you're simply too stupid to function on a rational human level. The flag is scheduled to fly from tomorrow through April 15th, Tax Day. Which is a huge protest day for the Baggers. Remember, these are the crazies who openly advocate armed insurgency or outright succession.

Lawlor said the flag is now associated with the tea party movement. The group will gather for a flag-raising ceremony Friday, and afterward candidates endorsed by the Connecticut Tea Party Patriots will host a press conference. "It doesn't sound like this is an event honoring the Marine Corps," Lawlor said.

Hey, I have some suggestions for other extremist groups who may want to fly "a recognized military flag" over the Capitol building. You know who I'm talking about. In fact, I've seen quite a few of them in the tea party crowds enthusiastically supporting their toxic brand of politics: 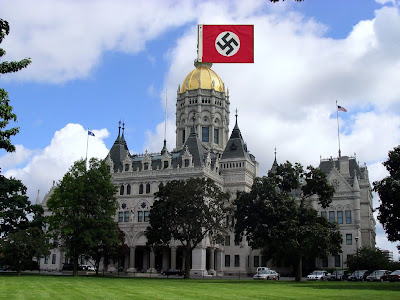 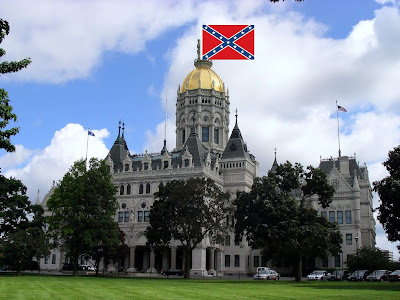 It sickens me to see our State Capitol used in such a blatantly partisan manner.

UPDATE: I was informed that the governor's office has nothing to do with the decision to fly the flag. Sorry about the mistake. Please register your complaints with the following office:

You need to know that the Governor's Office has nothing to do with decisions about flying the flag at the Capitol.

I made an image for these posts. Though I am sure it will upset some, I doubt it will upset them as much as your flags over the Capitol Building. A bunch of fringers anyways. I mean, the Tea Party is no more popular than socialist are.

Charles, it might be...if I knew who the hell Saul Alinsky is! (I know, Wikipedia.)

If ya aren't having fun doing this stuff, especially given what they give us to work with... :) I only wish that I had seen your post on this earlier.

Alinsky wrote the book on radical activism ("Rules for Radicals"). The irony is that while his influence has traditionally been in the left wing, right now the Tea Party uses textbook Alinsky strategies while simultaneously denouncing him. From his Wiki:

"In the course of nearly four decades of organizing the poor for radical social action, Alinsky made many enemies, but he has received praise from an array of public figures. His organizing skills were focused on improving the living conditions of poor communities across North America. In the 1950s, he began turning his attention to improving conditions of the African-American ghettos, beginning with Chicago's and later traveling to other ghettos in California, Michigan, New York City, and a dozen other "trouble spots."

His ideas were later adapted by some US college students and other young organizers in the late 1960s and formed part of their strategies for organizing on campus and beyond. Time magazine once wrote that "American democracy is being altered by Alinsky's ideas," and conservative author William F. Buckley said he was "very close to being an organizational genius.""

You so-called Democrats can keep your National Socialism flag and a flag long associated with the Southern Democrats of the 60's.

The "Southern Democrats" you refer to are now known as the backbone of what remains of the GOP since they are pretty much a southern party now.

See how that game is played?

Enough already, the gadsen flag is about as American as Aplle Pie. The Rebel flag belonged to the losers of the civil war, but none the less part of our heritage.

The Gadsen flag is no more political than flying a POW flag or a Rainbow flag for that matter.

It merely represents the mood of the nation, of which wants Washington D.C. abolished in favor of state rights.

Do you blame them?

Washington DC needs to be abolished. We do not need a federal Government. The states can rule collectively with a shared military.

The Gadsden Flag has obviously been taken over by the tea baggers. Don't even try to argue that they only want to fly it to honor the Marines, as they said in a news article today. They have made it a partisan symbol of their cause, and as such, the Capitol Police wisely decided not to fly it.

So blame the conservatives for screwing up the chances for the tea baggers to fly their adopted flag.

The people who think they're so smart because they are always questioning conventional wisdom, often to turn out to be exactly the opposite because they fail to quesiton their new opinion.
(I.e. 9/11 Conspiracy Theorists who immediately assume the position contrary to the obvious one, but then fail to question it).
CT Bob, you are exactly one of those people.
You have no idea why, but the Tea Party's values and ideas are so conventional and American (i.e. Low taxes, small government, racial equality etc etc...) that you MUST be contrary to it, just for the sake of being against it.