Please, just call it what it is

Every day, during my scan of the local blogosphere, I check out Tom Dudchik's news and blog compilation website Capitol Report.

And pretty much every day I find something that annoys me.

Which, if you think about it, means that Tom is probably doing something right with his Drudge-like site. I don't know the current number of hits he's getting, but I'm assuming it's ridiculously high.

Because the website is a handy resource for those of us who don't have the time to scan every single newspaper, blog, online news source, TV station, and opinion piece every day. According to what Tom tells me, he does this pretty much full time now.

I don't have any problem with any of that.

What does bother me; what causes my acid reflux to give an extra squirt in the morning, is the editorial choices he makes in his headlines.

I've gone over this with him several times, and he insists that every quote is pulled directly from the article. I don't dispute that, but I do think he cherry picks the one quote from many stories that often slants it against whatever Democrat is mentioned therein. I don't have an exact count, but it seems to happen like 80% of the time.

One of today's headlines is a perfect example of this: 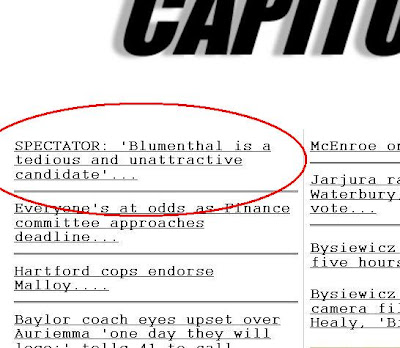 If you glance only at the headline and don't click through, you'll assume that the article is focused exclusively on Dick Blumenthal's apparent odiousness.

In fact, the story (linked HERE) is almost exclusively about ROB SIMMONS and his overwhelming awfulness!

Here's the front page of the American Spectator with the link to their own article: 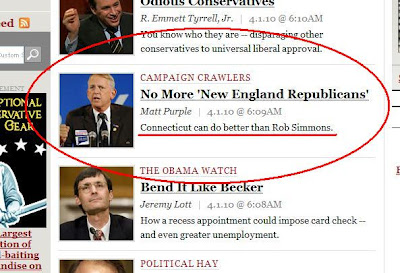 Wow! The actual story is about why Rob Simmons is a terrible Republican and why Connecticut voters should consider some of the other Republicans in the race. Dudchik needed to wade through seventeen paragraphs of the article before finding a quote that gives an entirely different impression of the point of the story!

Here's some quotes that any reasonable, impartial person might use instead to convey an accurate impression of the writer's point:

Simmons is a "fraudulent" Connecticut Republican.

But no, Dudchik apparently decided that using his editorial discretion to pick the one quote that smears the Attorney General was the best way to go. And to anyone who views his front page but doesn't click through to the story, they walk away with the impression that there's a whole article devoted to Blumenthal's "tedious" nature. It's a persuasive yet insidious way to effect opinion under the guise of "journalism".

I'm sorry Tom, but this simply doesn't strike me as responsible journalism. We both know that everyone has some political bias in their writing; but unlike you, I make no effort whatsoever to hide mine. I'm a progressive Democrat and proud of it.

I don't deny that Capitol Report is a great compilation website, and I'm sure you'll be very successful at it. I'll continue to read it, although I'll keep my Tums at the ready.

But please, if you're going to continue to appear to manipulate opinion with your editorial choices, the least you could do is just admit it.
Posted by CT Bob at 4/01/2010 09:11:00 AM

Yeah Tom, just admit it. Toss off the false non-partisan veneer, and admit to being a GOP shill.

Boo hoo. Admit what? Am I missing something? This guy isn't a journalist -- he can meet any standards he chooses to. And what's he hiding? A second-grader could figure out where he's coming from. He doesn't have to "admit" anything. Besides, I'm sure the market for this site isn't the guy who buys scratchies at the local liquor store. It's for insiders, so this business about people no clicking through to see what the story is really about is weak.

Hey, if Dudchik didn't claim to me many times that he's totally non-partisan, I'd be fine with it.

But when I see bullshit like that headline, I feel obligated to point out the hypocrisy. Sorry if that offends you, sport.

He's got an ugly site that any clever high school student could maintain. I don't get the appeal. Anyone can track stories just as well and without the snark by using an RSS reader.

Anonymous said it straight about the simplicity of RSS. I repost mine for 2 reasons : I can't get the thing to reload reliably - lots of 404 Returns - and it's a demo combined with Index. No professionalism indicated.
Works better than merely o.k., though.
http://opitslinkfest.blogspot.com/2010/04/6-apr-rss-snapshot.html
So have a look at the original - link included. Between it and 'About' I try to show people how simple it is to 'Roll Your Own.'