Sometimes shaming them DOES work 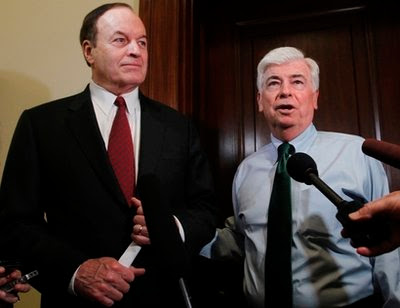 (Senate Banking Committee Chairman Christopher Dodd, D-Conn., right, and the committee's ranking Republican Sen. Richard Shelby, R-Ala., emerge from a meeting on Capitol Hill in Washington, Monday, April 26, 2010, ahead of a crucial test vote for the financial reform bill. AP Photo)
On Wednesday Senate GOP leaders admitted that their brilliant strategy of "Just Say No To Everything" seems to have backfired on them, when criticism of their attempt to prevent debate on the biggest overhaul of banking regulation since the Great Depression reached a fever pitch.

The general public, it seems, is finally catching on that the Republicans couldn't care less about the people they supposedly represent if there's ANY chance legislation beneficial to them might be considered a positive achievement by the Democrats.

Democrats and Republicans agree the Senate will ultimately pass landmark changes aimed at preventing a recurrence of the crisis that knocked the nation's financial system to its knees in 2008, but the battle now begins over crucial details. The House has already passed its version.

Democrats said the Republicans had given in after three days of votes to block debate, realizing they were on the losing end of a battle for public opinion. GOP lawmakers said they would now switch to trying to change the bill on the Senate floor.

This battle, in large part, was won by Sen. Chris Dodd, who worked tirelessly to convince Republican senators that this legislation absolutely needs to succeed, regardless of the party affiliation of the legislators who will vote on it.

This is the sort of thing that citizens can accomplish, by registering complaints to their representatives if they work to obstruct legislation that's obviously in everyone's best interest. By raising a clamor with the media and shaming the guilty party for their obstructionism, people can have a very real effect on what gets done in Washington.

Everyone wants more progressive action when it actually benefits them. When people start to see positive results from those who they voted in to look out for their interests, they'll be more likely to allow them to continue after the next election.
Posted by CT Bob at 4/29/2010 07:58:00 AM