How can you tell when Joe Lieberman is lying? 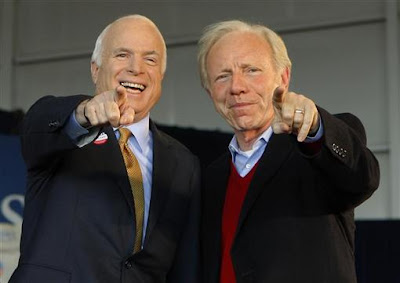 Whenever his lips are moving, especially in reference to the public option!

Sen. Joe Lieberman has been proven wrong on several occasions when he claimed that the public option was NOT a part of Barack Obama's campaign.

“It’s classic politics of our time that if you look at the campaign last year, presidential, you can’t find a mention of public option,” Lieberman said. “It was added after the election as a part of what we normally consider health insurance reform — insurance market reforms, cover people, cover people who are not covered.

In fact, the 2008 Democratic Party Platform referred to the need for a “public plan,” and candidate Barack Obama referred more than once to the idea of providing people who can’t get private insurance with government-backed insurance similar to that which members of Congress get.

So what does Joe do? He simply goes out and tells the exact same lie to anyone who will still listen to the thoroughly discredited senator.

From the HuffPo (this morning):

Lieberman is among several in the caucus who have threatened to doom the effort, and he sounded like Eeyore again Saturday night, calling the public option "an eleventh-hour addition to a debate that's gone on for decades. Nobody's ever talked about a public option before, not even in the presidential campaign last year."

He was also corrected by TPM last night.

Even following his totally begrudging vote to allow debate in the Senate, he can't stop lying. When it comes to the public option, the truth simply isn't IN the man. We're talking about a severe case of denial, pathological in nature, that leads me to think that Joe Lieberman actually fully believes his own bullshit!

That, coupled with his extreme paranoia and a vicious persecution complex (how many times has he recently mentioned what the Democrats "did to him" in 2006?) convinces me that the man has lost touch with reality, and should be examined immediately by a team of psychiatrists (paid for by his wonderful government health insurance) to see if he's still competent to serve in the US Senate.

I'm semi-serious here; this is the guy who makes decisions that affects all of us, and with his diminished mental capacity I strongly suspect he's unfit to lead the Senate Committee on Homeland Security and Governmental Affairs. It's clearly apparent that Sen. Lieberman is just one tiny nudge away from going completely over the edge into sheer lunacy *.

dont even try to pretend - you are obsessed with 2006 just as much (if not more) as lieberman.

He is unfit to lead the Senate Committee on Homeland Security?

In my opinion he is the ONLY Democrat that is qualified.

Anonymous - Maybe I am. Who knows?

But there's a difference; I don't legislate on issues that have a direct impact on 280,000,000 or so Americans.

I'm just a dopey blogger. At most, I'll annoy DOZENS of Americans. And that's only if it's a good day!

I agree with your asessment of his mental health.

And I'll double down with the idea that he's evil too. Time and experience changed him. Like Gollum.

Bob may be obsessed with 2006, but Holy Joe is obsessed with contributions from the pharma/insurance industry and ignoring the wishes of the CT people who support the PO.

He outright lies on the issue.

He is also a huge medai whore. In a rare flash of honesty, he admitted "I feel relevant"

Swede - would you please
learn how to post a link?

ACR -
Sorry but I have zero interest in memorizing HTML formats. Copy and paste is all you get from me.
oldswede

That's where you get the old in "oldswede"

CTBob and WHBob,
My lack of interest in HTML coding is not at all new. I started using the internet when access was limited to academic institutions and home users had to telnet to the University node, way before it was the WWW. My first commercial service was Delphi, which predated Compuserve.
When HTML arrived, I looked at it and said, no thanks. I realized that if it took hold, users would quickly develop software to handle the coding part. There was no need for me to bother learning it, so I didn't and I still haven't seen any need. Most of the blogs I visit use Unicode or something similar.
Anyway, if ACR has a PC and uses Firefox, he can get a little Firefox add-on called Linkification that will convert text URLs to links automatically.
oldswede

I've always enjoyed HTML myself. Something about all that "a href" and "img src" stuff that was fun to noodle with. But they do make it easier for the kids these days.

>>My first commercial service was Delphi, which predated Compuserve.

CompuServe began in 1969 as a mainframe computer time sharing service.

Delphi was incorporated in 1973.

Served as asst sysop of CIS forum `HOM-62' during early set-up and as it changed it's name offically to `CARS'.

It was a more polite and civilized experience.
As soon as AOL bought and took over, CompuServe tanked as AOL insisted pseudonyms be allowed, while CIS had insisted users post under the same name as their bill. As soon as people were allowed to sign-on as "Red Rider" or "Silver Bullet" anything resembling decorum was out the window.

Ignorant Americans must stop trying to frame these issues as Dem vs. Repub. Both sides are FOS, both sides are on the take, and both sides have amply demonstrated they'll ruin the country if necessary to stay in power. Remember how four years ago Dems were bemoaning the Bush deficits and the cost of the wars. Well Obama has quadrupled the deficit his first year in office and escalated the war by adding more troops to Afghanistan, yet no harsh criticism from the left. For those who think the Repubs favor corporations over people, I ask you to wake up. The only thing certain when health reform is finally passed, is that the corporations will be doing fine making record profits, and the majority of Americans will be getting screwed with rationed care.

So, we should all just give up, is what you're saying?

>>So, we should all just give up, is what you're saying?