Jodi Rell is a nice lady 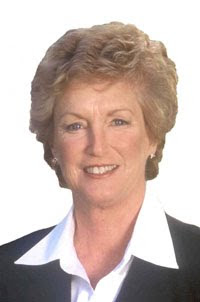 Just because I'm a guy who writes a blog that is decidedly liberal in it's slant doesn't mean I can't be appreciative of Gov. Rell for her years of service to the state.

While there were many occasions where I disagreed with her positions, I also have to give her props for doing some things that I feel were truly helpful and beneficial for the state.

Especially in recent months Gov. Rell has surprised me on many occasions. I openly (some might say "dripping with smugness") predicted she would use her veto powers to quash progressive legislation, yet she either signed the bill or, like the budget, allowed it to become effective without a signature.

I've written enough of the suspected political motivations for her actions, but really, there's no reason to hold onto those thoughts any more. She's leaving at the end of her term, and we can all agree regardless of party affiliation that Jodi Rell is a nice lady and a reasonably centrist governor.

And it's certainly a nice change of pace to know that when our current governor leaves office, it won't be for a stretch in prison!

Why shouldn't you love her?

She is Republican In Name Only.

I don't know why the Democrats didn't cross endorse her.

Yes she is a very nice lady. A nice lady with no backbone whatsoever. I had such high hopes when she took office.

Fact is that she is even worse than John Rowland if you forget the scandal that sent him to prison. At least Rowland appointed a few (he didn’t’ quite trade or sell them all) good judges.

A nice lady that has taxed how many jobs right out of the state?

I almost never vote for Democrats but last time I voted for John DeStefano without the slightest bit of hesitation.

At least he had the stones to admit he was a Democrat.