Senator Lieberman's campaign of corruption is exposed in yet another scandal.

A Hartford Democrat who was fined and barred from involvement in absentee ballot activities last year is working for a company hired by Sen. Joseph I. Lieberman's campaign to do voter outreach in the city - including the distribution of absentee ballot applications.

Prenzina Holloway was fined $10,000 in July 2005 and ordered not to distribute absentee ballot applications or to assist voters with the ballots for two years, after the State Elections Enforcement Commission found that she had forged a voter's signature in the 2004 election. 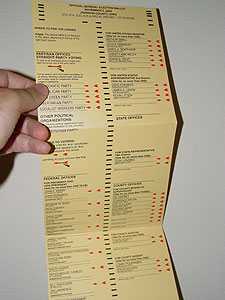 Holloway acknowledges working for Urban Voters and Associates, a company paid $17,550 by the Lieberman campaign since September to do "field work." But she said she isn't involved in the company's absentee ballot operations.

But five people at a Vine Street housing complex for the elderly have told The Courant that Holloway and another person came to their doors to give them absentee ballot applications, and a security worker at another complex on Woodland Street said Holloway tried to get into the building to distribute applications there. Holloway was barred from the building after getting into a verbal altercation with the worker after he made supportive comments about Lieberman's main challenger, Ned Lamont.

Other sources at the building said she called back a week later to try to "sweet talk" her way into the facility.

Holloway committed absentee ballot fraud in the 2004 election when she voted on behalf of, and forged the signature of, at least one voter, according to the State Elections Enforcement Commission. The commission also found evidence that Holloway was in the same room with at least two other voters as they filled out absentee ballots, a violation of state election law.

But Claudia Dismuke, 85, was one of five voters at Mary Mahoney Village on Vine Street who said Holloway and an older man came to their doors several weeks ago to give them absentee ballot applications. Dismuke said she has known Holloway for years.

"She came by with another man," Dismuke said. "She helped me fill it out and then I put the stamp on it. I mailed it in."

Four other residents at Mary Mahoney Village - James Hightower, Olga Morales, Angelito Vazques and Dorothy McKinley - said they did not know Holloway personally but recognized her when shown a picture. All four said Holloway had given them applications.

There you go again, Senator. Breaking laws that you feel shouldn't apply to you.

How long will you be allowed to get away with this kind of behaviour?

Shame Senator....Shame....(In the best British Parliment voice I can do).

Im in Manchester, anyone else notice that all the "Im Sticking with Joe" signs are on public roads, OR Vacant Houses up for sale (with real-estate signs posted)? I thought it was funny...

Actually, it's not funny. It's illegal without the owner's permission.

But with Joe's "campaign of corruption", what else would you expect from him?

Anonymous -
What that woman says Holloway did is illegal. Campaign workers can provide voters with ballots, but must leave the room as they are filled out.

The question should be, how did Lieberman end up choosing to hire Urban Voters & Associates, a company run out of someone's multi-family house, to the tune of $17,000. What services were provided for this money? How many people were on staff? Does Urban Voters & Associates keep time sheets, invoices, and expense reports - can they prove that they spent all of this money on services rendered and that it was not passed along as street money?

Actually, let's be very clear. Campaign workers can provide voters with Absentee Ballot APPLICATIONS to sign and return to the Town Clerk's office. The ballot can only be mailed directly to the voter and campaign workers cannot be anywhere near them, or in the room when the voter casts their vote, or handle the ballot in any way shape or form. Sometimes a voter may ask a worker to put it in the mail for them... for which they have to be told No.

PDF Guide to hacking the vote:

The question should be, how did Lieberman end up choosing to hire Urban Voters & Associates, a company run out of someone's multi-family house, to the tune of $17,000. What services were provided for this money? How many people were on staff? Does Urban Voters & Associates keep time sheets, invoices, and expense reports - can they prove that they spent all of this money on services rendered and that it was not passed along as street money?

To answer your question: The company DOES NOT EXIST in the Secretary of State's records, according to their website. Also the company is 'owned' by a 17 year old (the young lady who is mentioned in the article as 'the owner of the company). Not only that, but Holloway is a 'Democratic Town Committee' which by rule should be supporting the 'endorsed' candidate. There is a photo of Holloway, decked out in 'Vote Joe' shirts in the arms of Sen. Landrieu when she visited to shill for LIEberman.