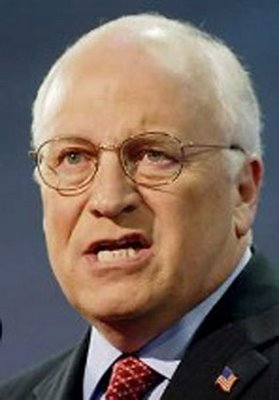 Republicans are scrambling to the aid of Joe Lieberman. Vice President Dick Cheney tells us of his love for Joe. Can any rational person tell me WHY Lieberman should stay in office?

From this article at The Raw Story:

With less than a month to go before the elections, Vice President Dick Cheney offered up strong words of praise for Joe Lieberman, while taking shots at the "Dean Democrats" who have "purged" the Connecticut senator from the Democratic Party.

"The case of Joe Lieberman is a perfect illustration of the basic philosophical difference between the two parties in the year 2006," Cheney said at a Topeka, Kansas fundraiser for Rep. Jim Ryun on Thursday afternoon. "And it's a reminder that the elections on November 7th will have enormous consequences for this nation, one way or the other."

Lieberman is running for reelection as an Independent after his upset in the Democratic primary by challenger Ned Lamont, which was primarily due to his continued support of the war in Iraq and his perceived coziness with the Bush Administration.

After slamming DNC Chairman Howard Dean for declaring nearly three years ago that "the capture of Saddam [Hussein] has not made America safer," Cheney said that "[p]erhaps it should come as no surprise that such a party would turn its back on a man like Senator Joe Lieberman of Connecticut."

In December of 2003, Lieberman had said that Dean was living in a "spider hole of denial" if he believed America wouldn't be safer after the former Iraqi leader's capture.

"Senator Lieberman was my opponent in 2000 – Al Gore's running mate, a longtime senator, and one of the most loyal and distinguished Democrats of his generation," said Cheney. "Joe is also an unapologetic supporter of the fight against terror."

The vice president championed the Democratic senator for his "courage to stick" to his convictions, with regards to the war in Iraq.

"He voted to support military action in Iraq when most senators in both parties did the same – and he's had the courage to stick by that vote even when things got tough," Cheney explained. "And now, for that reason alone, the Dean Democrats have purged Joe Lieberman from the Democratic Party."

Many Lamont supporters have also criticized Lieberman for suggesting that it's improper to criticize a president during wartime.

"Their choice, instead, is a candidate whose explicit goal is to give up the fight against the terrorists in Iraq – never mind that Iraq is a fellow democracy; never mind that the Iraqi people and their elected leaders are counting on us," said Cheney.

We have a choice in November. We can stay the course.

As some one from Connecticut not Texas I mean Wyoming I'd like to note a slight error in your speach. Connecticut and Connecticut Democrates didn't turn their backs on Joe Lieberman, Joe left us for you.

This brings up a troubling point, Joe was defeated in a primary - a kind of election but we don't dip our fingers in purple ink and wave them on Fox News here - but you seem unwilling or unable to accept elections that don't go 100% your way. How can you bring democracy to Iraq when you can't tolerate it at home?

Bob, as you pointed out in one of your prior comments, someone needs to answer how we expect to pay for our occupation in Iraq that has turned into a bloody civil war! Here is a quote from a recent letter to the editor by our financial debt:

"As it stands today, our national debt is $8.5 trillion. This is not a projection; this is the actual amount. That works out to almost $30,000 for every citizen."

The Iraq War is costing over $250 million a day! Remember this war was sold to us that the Iraqi’s were going to pay for this war from their oil revenues and it was to last only 6 months. Bush now says we will be there at least until 2010 – and Joe still supports Bush’s “Stay the Course” failure!

For more information on the dollar cost of this war, go to the National Priorities Project, a bi-partisan organization that shows the actual cost broken down per state: http://nationalpriorities.org/index.php?option=com_frontpage&Itemid=1

For the cost of human life, people need to search their conscience and tell me how willing they are to send their children to die for this mistake?

As your post demonstrates, Lieberman is (and always has been) a Bush/Cheney Republican. Even now, in an election cycle when most Republicans no longer claim to be Bush/Cheney Republicans, Joe leads the Bush/Cheney cheering section. And yet, he remains ahead in the polls. WTF? People in Connecticut not paying attention or are the voters under some top-secret form of mass hypnosis that prevents the use of logic and reason?

I don't live in the Nutmeg state, but have been following Ned Lamont since day one...I have a question!! Do any of the local papers print anything negative about old Joe? Are there editorials regarding his relationship with the Republicans from the top down?? There is a wealth of information available to bring this man down if people would only open their eyes and see where he really stands...I can almost guarantee that if Joe wins, he will change parties and completely side with the Republicans. He has been doing it for years now...he will make it legal. How do the citizens of Connecticut feel about Joe now?? If it were me, I would be ashamed? Their party is falling apart and every day there is a new bomb falling daily. How many more crimes do these people have to see before they realize this present Republican Congress is Corrupt!??

I do hope that they all wake up and see what is really happening...we have 26 days to elect Ned Lamont and he deserves to win.

Yeah, there are quite a few local papers that have run stories critical of Lieberman. Usually Lamontblog is the place I go to check all the daily stories; T.Party does a great job getting the news up fast.