The Media is Lazy and Dumb 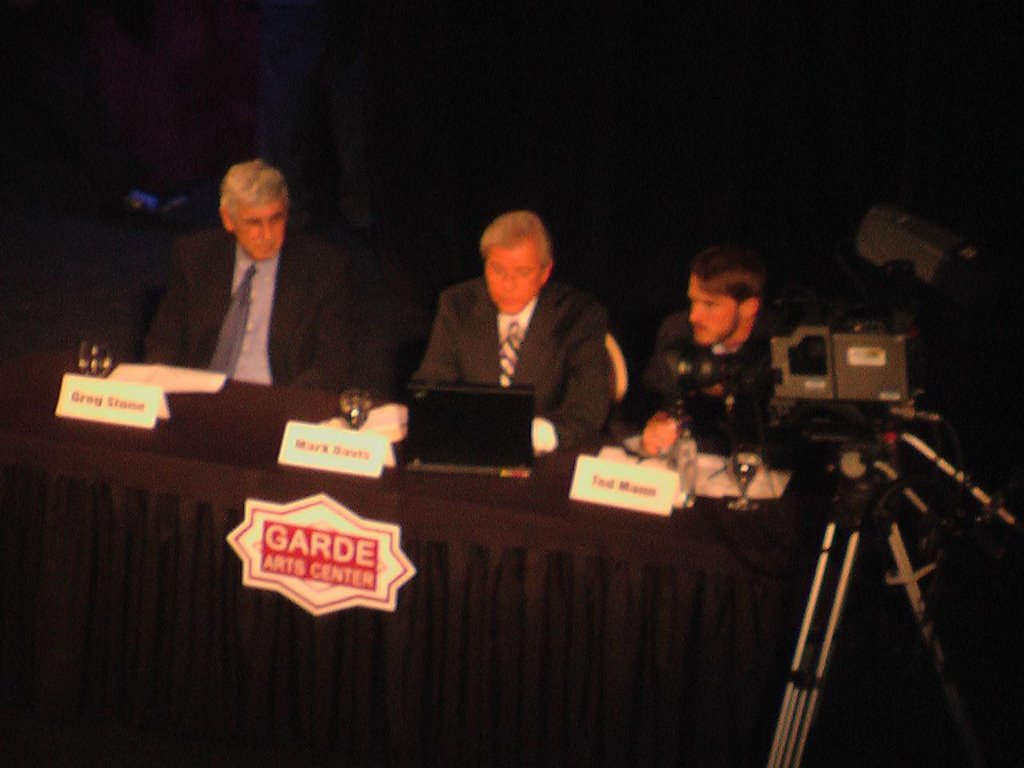 I've been resisting this thought for weeks now, but I just can't prevent it from entering my mind and spilling out all over my keyboard.

The Media is Lazy and Dumb

First, let me discuss how I came to this conclusion.

I've never been involved in a campaign before. At least, not with anywhere NEAR the total immersion I've experienced over the last six months. This is an entirely new experience to me.

In many ways, it's been an eye-opener. I'm continually amazed at the things I see, hear, and feel while I'm out there making my videos, talking to people, and observing the process.

Senators give answers about things that are not only wrong, but agressively so. The ego of a sitting US Senator is a terrible and awesome thing. Politicians talk like John Gotti and Tony Soprano. Campaign staffers routinely lie as a matter of course; they lie when they don't even HAVE to, simply out of habit.

And the Media...well, as I said, they're Lazy and Dumb.

How else can you explain the way they simply transcribe what a candidate says without challenging him on the most basic inaccuracies? Or the way they draw conclusions that are not only erroneous, but are facing 180 degrees from the truth?

Or the way the Media completely ignores the fact that Joe Lieberman apparently has a slush fund of over a third of a million dollars, and nobody is asking about it?

Yet, for some reason, the media doesn't think this is a significant issue. Amazing.

Well, it's disappointing. I used to think that the Media was a sort of noble profession. Guys like the famous Watergate-cracking team of Woodward and Bernstein. People who would stay up late, digging through the tangle of clues, relentlessly search for the underlying truth that will expose the guilty and exonerate the innocent.

But now, the Media seems to consist of nothing but transcribers, politically-motivated spinners, and self-aggrandizing boors. It's the perfect career path for the Lazy and the Dumb. The only qualifications you need apparently is a basic mastery of grammar and spelling, and a willingness to allow egregious acts of public betrayal to occur right under your nose without making any effort to rectify them.

The Lieberman Slush Fund is potentially a Pulitzer-worthy story for a motivated journalist, but it's been out for over a week now and none of our Media hotshots have even bothered calling Tammy Sun out on her promise to release the detailed accounting of the missing loot last Monday. They're letting the story slide through their lazy and dumb fingers.

But Mark Davis did a wonderful job of looking smug while asking Ned Lamont about his advertising during the debate. Because what's apparently important is being a smart-ass and taking shots at the honest candidates while letting the criminal ones slide by. Because what counts is how clever you look on TV, not the basic TRUTH of the issues.

I can only do so much. I was the only person at the debate who dared ask Lieberman about his slush fund, while all the other Media simply asked the same, tired and lame questions that Joe has heard and responded to a million times. Or maybe it was only a THIRD of a million times. It doesn't matter.

What matters is this - until the Media takes some initiative and starts digging for the news instead of simply calling it in, we'll be stuck with bad government and this inevitable conclusion:

I made a similar comment on the NY Times Blog. They ran a correction to the story that reported Lieberman never uttered the words "stay the course," which was instantly proven inaccurate by dozens of readers.

The NY Times and all the Connecticut newspapers may be sitting on the biggest political scandal story of the year -- the $387,000 petty cash fund -- and they show no interest in pursuing it.

Consider that Joe Lieberman was working on a new campaign finance reform law shortly after the Abramoff scandal. Is this the kind of "reform" he had in mind? That's the first question to ask, and the story almost writes itself the rest of the way.

If it were me, I would be calling the companies and people listed as "consultants" to find out who they paid and for what. I'd try to find anyone who received cash payments from Joe Lieberman. It's called "follow the dollar" and it's a very sound method of uncovering dirt that dates back to Watergate and earlier.

If the mainstream media continues to rely on talking-point-driven journalism, and fails to provide real substantive reporting, they will become less relevant and less valuable to their readers, to the point their coverage is simply not worth paying for. I already canceled my subscription to the Times and feel no worse off for it.

Bob, I have been dormant in the political interest arena for years. Lamont has sparked new activism I haven't felt since the Vietnam war era. I am a fledgling in the blogsphere as I used to think most bloggers are self-absorbed bores (well, many are). I also used to go first to the NYT and WaPo for news. Not anymore. While I may not agree with everything on the political blogs, I feel more informed and have a better sense of public sentiment. I believe that blogs such as yours will replace MSM in the very near future. Your only hindrance is the lack of capital required to do the Woodward/Bernstein type of reporting. Remember, those two were mavericks before they became part of the establishment.

I hope that after this election, you and others will continue to fight the good fight for truth -- aka -- a royal pain in the ass to the powers that aren't. Thanks.

I have watched the media with great frustration, ever since 9/11 when they all backed off into a corner, too afraid to question this administration about TRUTH! That watched the illegal invasion into Iraq and never questioned the legality of it, merely helped to criticize anyone who dared to say it was wrong as anti-american and un-patriotic !

Now I check out almost daily, other news sources like BBC, Guardian, Asia Times, and also try and keep the Courant in perspective by checking out same articles on LAtimes, WashPost, etc, to see how they each slant it.Amazing what a headline can do to a story. Even more amazing the stories we are not told, or how much more truthful they are on International sites.
I hope all of you have written either a letter to editor (letters@courant.com) or to the head of the courant himself )cteutsch@courant.com), to say based on last week's endorsement of all the Democratic candidates, they will be coming out for Ned Lamont, also a Democrat, ALSO a much needed change! That all the reasons they cited for endorsing the Dems, extend to Ned also.

Maybe when the Dems get in, they will go back to the Fair & Balanced Doctrine for MSM!

Having been involved in politics and campaigns for a while now, I can tell you that the CT political press is considered by the national political players (party, candidate and national press) to be among the laziest in the country. The true losers are the people of CT, regardless of who they support.

A political committee may maintain a petty cash fund out of which it may make expenditures not in excess of $100 to any person per purchase or transaction.

Lieberman's campaign spokeswoman, Tammy Sun, said today the cash was paid to field coordinators who then distributed the money to workers who canvassed for the three-term incumbent, who's running as an independent candidate after his primary loss to Lamont in August.

Assuming the "field coordinators" did not take anything off the top, this boils down to:

The Lieberman campaign would have had to pay somewhere around 3870 people to canvas in the third quarter (approx. 90 days)

How many people did Ned pay to canvas in the third quarter? My guess is none.

Sorry I forgot to source the info:

They're not lazy and dumb. They NEED NEW NEWS, and we're not giving it to them. The Iraq war; the Kiss Float - old news.

I created a lovely anti-Lieberman commercial; could you please post on your blog? Enjoy:

It was made by Brian Felsen and Stefan Avalos (legendary director of “The Last Broadcast,” which “The Blair Witch Project” “borrowed” from.)

We made it because though Iraq’s the #1 issue, it's not enough to win needed GOP voters, who’ll think of Ned as a liberal, a one-note candidate, or a “cut-and-runner.” Ned will LOSE narrowly, unless he can convince a reasonable minority of Republicans that it is more in their own interests to vote for him over Joe.

This ad can show that Joe’s a loser for our wallets, because he made CT the #49 state out of 50 in terms of return on their tax dollars. You're welcome to use the ad or its idea to run anywhere on TV or the net in Republican areas.

And: spread the word to make a NEW KISS FLOAT; it’s old news; the media needs NEW NEWS to report: a series of "We're #49!" parties. See www.elifsavas.com/49 to send the footage in, and I’ll edit it into something great and flood the media with it..

Meanwhile, please post our beautiful “cake video” on your wonderful blog, and spread the word to hold celebrations and send us the footage. I can also send the vid to you as .wmv format or host it on my own site as wmv & qt - just let me know.

No, they ARE lazy and dumb.

"no new news"...give me a fucking break! We have $387,000 worth of "new news", but those lazy and dumb idiots can't recognize or won't go after a good story when they see one.

Believe me, we appreciate your support for Ned, but don't be so fucking condescending. I like your video, but this AIN'T all about YOU!

The $387,000 story got no traction chief. Face it. People care about ideas and vision - an your guy wouldn't reciognize either. He's spent $7 million of his own petty cash and nobody cares about that either!