How can Ned Lamont expect fair and unbiased reporting from a newspaper that long ago cast it's lot with three-term incumbant senator Joe Lieberman?

(UPDATE: The Hartford Courant finally pulled down the page, and Reader Rep Karen Hunter posted this article in the Courant's blog, along with other reader complaints. Link to that blog entry is HERE. I just love how everything that helps Lieberman is a "computer glitch". Funny how there aren't any pro-Lamont glitches happening anywhere!)

If the Hartford Courant's ownership is backing the senator, as they've stated this weekend by endorsing Lieberman, then obviously that bias will trickle down through every corner of the newspaper's operations; from it's reporters to it's web site. Here's a perfect example (click image to enlarge): 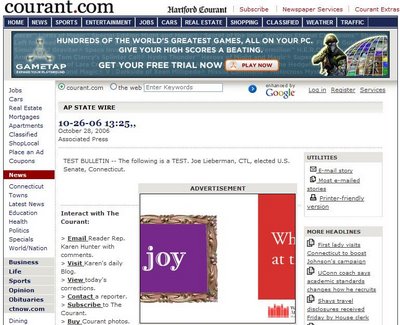 This appeared on the Courant.com website last Thursday. Someone was apparently testing some feature on the website, and uploaded this page for public viewing.

Happens all the time.

But when you read the fine print, you can see where the Courant's priorities lie.

This "test bulletin" was attributed to the "AP STATE WIRE", which graphically shows what the newspaper hopes and works toward what might happen.

Here's the link to the actual Courant webpage that shows the "bulletin", but I expect it to disappear at any moment once they realize it is being seen by people.

When you have "institutionalized bias" like this that infects every facet of a news organization, you can't possibly expect fair coverage from a paper.

just saw it in the comments of Firedoglake - I love the internets!

Let me set up before your thoughts, good friends,

On supposition; which if you will mark, you shall perceive how horrible a shape your innovation bears:

first, tis a sin which oft the apostle did forewarn us of, urging obedience to authority; and twere no error, if I told you all, you were in arms against your God himself.

Even the reliably embarassing NH Register could see through Ned's flimsy campaign... now I've seen it all!

Yeah, well when am I gonna get some of those slush bucks?

still up; how sleazy can the courant get?

is the register biased too?

Are the people at the Courant truely that ignorant? (Considering they endorsed Lieberman, that was a rhetorical question there...) :D

Argument is moot...no one listens to newspaper editorial suggestions anymore. They can declare for whomever, but people make up their own minds. Newspapers are dying.