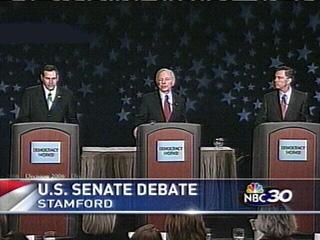 Did anyone else notice how Joe Lieberman started the debate with a charge that Lamont was going to attack him BEFORE Ned even opened his mouth?

Did that strike you as kind of...strange? Like, he's trying SO HARD to prove his agenda that Lamont is a negative campaigner that Joe preemptively attacked Ned? Really odd.

And then tonight I went to the joe2006 blog...hey, that's what I'm paid for (...well, I WOULD be paid for it if I did this for money) and saw the latest entry in that wonderful and entertaining blog.

The thing that seemed a little funny was this...if you'd missed the debate and only happened to read Joe's account of it, you wouldn't have even KNOWN that Alan Schlesinger was there!

So, if you only get your news from joe2006, you'd see that Alan Schlesinger was nowhere to be found, and that Joe somehow overcame his dismal performance against Ned and WON THE DEBATE!

Yeah, well, we all know that joe2006 is "Fantasyland". And a magical land it is, where Joe reigns supreme and Free Speech is outlawed. Paradise, it is, for Joe.

But if you want some REAL Free Speech, drop by the Joe 2006 Blog page I set up, and comment freely on Lieberman's escape from reality.

Bob, I wrote this below before you put up three other posts, so I'll repeat it here.

For the next debate, I think both Ned and Alan should show up with violins so they can add some background music to Joe’s slobbering tales of being attacked – what ya think?

Lieberman's last name begins with a lie. The Two-Faced Palindrome Lieberman - He's a rat from any direction.

This Photoshop job illustrates this.

It is hard to see how this debate helps Lieberman. I am not sure how it adds up for Lamont. A win for Lamont would be good for Democratic party. If Joe wins, he will be like malware or a trojan waiting to attack its host.

LOL. Joe is a computer virus. And if we don't "clean" him, he'll crash our government and erase our rights.

What a whining, cry baby Lieberman turned out to be. And so nasty.

If he fully disclosed, we'd learn that he too is a multi-millionaire.

Where is his CT home? Anybody? Somebody?

I thought the pre-emptive strike on Ned's "negativity" was designed to fill air time at start of debate and dominate it, convince people to channel surf past the debates. I bet there are some stats on how long people actually stay tuned in, and Lieberman dominated long enough to get people to tune out - thus reducing audience for the other two.

If a tree falls in a forest, etc.