Father/Son team up for Edwards (Hartford Courant photo)
Adam Talbot and Jeff ("Dad") Talbot are featured on a front page article in today's Hartford Courant, and the online version of the story includes a nice video of their experiences (click link to view).

Adam and Dad are best known for building the iconic "Kiss float", which became the ubiquitous symbol of Ned Lamont's insurgent campaign against DC insider and warmongering blowhard Senator Joe Lieberman in 2006.

Adam, then 16, took the design from the famous "Kiss button", created by CT Keith (Crane) early in the effort to unseat Lieberman, and built it into a larger-than-life "float", mounted on the back of a pickup truck (often Jon Kantrowitz's vehicle) that appeared across the state in the run up to both the primary and general elections. 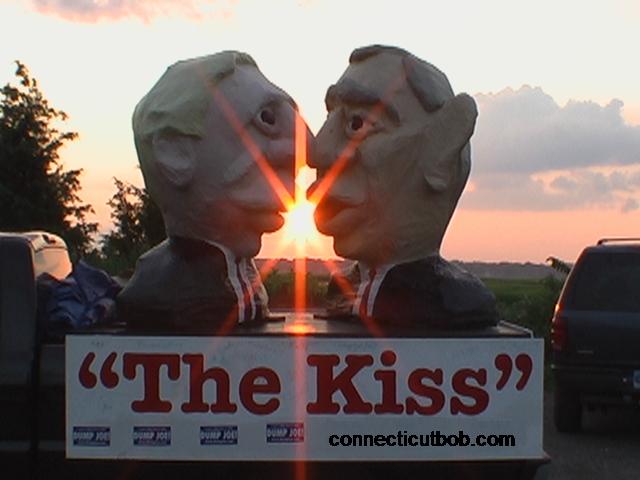 Adam and Jeff's efforts absolutely had a tremendous effect on the outcome of the primary, and for their efforts they've received little reward, except our eternal gratitude and the knowledge that they personally helped make a difference.

Today, with them working up in New Hampshire, I can't help but think they'll help make a difference in the Edwards campaign too.