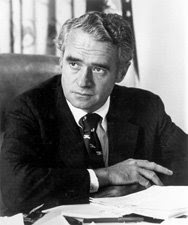 OK, I've calmed down a bit since yesterday, so maybe I'll manage to be a little more coherent here. I'm still quite upset with John Edwards though, so if I launch into another rant, I beg your forgiveness in advance.

Any personal issues aside, I think the real effect of this mess is going to be in the vetting of candidates from now on. If Edwards had managed to somehow win the nomination and this news surfaced, we'd almost definitely have President McCain being sworn in this coming January.

And Edwards was on the list of potential VP candidates for Barack Obama's ticket. We've had problems like this before, and it all boils down to the VP candidate being dishonest about their past during the vetting process.

Remember Thomas Eagleton? He (pictured above) was the senator from Missouri chosen to be George McGovern's running mate in the contentious 1972 campaign. It turns out that Eagleton forgot about his mental breakdowns and history of electric shock treatments in the 1960's.

Talk about an inconvenient truth! Eagleton was forced to withdraw from the race, and Kennedy in-law Sargent Shriver took his place. McGovern's campaign basically fell to pieces after that and Nixon went on to win reelection by a huge landslide.

How about Gary Hart, remember him? The married Colorado senator was the hands-down Democratic favorite going into the 1988 campaign. Hart was dogged by rumors of infidelity for years, but he proudly dared the media to "follow me around. I don't care. I'm serious. If anybody wants to put a tail on me, go ahead. They'll be very bored."

Soon thereafter, photos appeared of the senator with a comely blond named Donna Rice sitting on his lap while overnighting in Bimini aboard a yacht appropriately named "Monkey Business". A week later he dropped out of the race. George H.W. Bush became our next president. 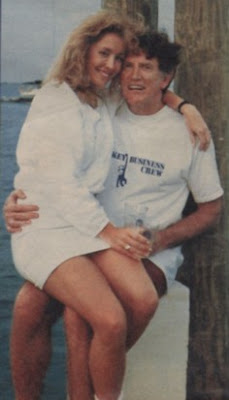 I think there's something at work besides simple hubris. It almost appears pathological the way some politicians seem to need to "break the rules" and get away with it. The idea that not only can they do anything they want, but they also get some kind of rush by lying and getting away with it.

Sure, the Eagleton thing is more a matter of someone who wants to hide a damaging past, like George W. Bush's alleged drunk driving and cocaine use or his AWOL Air National Guard service. But the likes of Gary Hart and John Edwards indicate a complete lack of any sense of responsibility for their actions, along with an indifference to the damage they will cause if their indiscretions become public.

There's one thing that I'm sure of, and that is the vetting process for VP and presidential candidates has suddenly gotten much more stringent. If they asked me, I'd say that hooking them up to lie detectors like they do with CIA applicants would be a good start. If they can't stand it to sweat it out hooked up to the machine for a few minutes, then they probably lack the intestinal fortitude to run for high office anyway.

Because, as the Edwards scandal shows, it's become tragically apparent that we can't trust anyone on their word alone anymore.
Posted by CT Bob at 8/09/2008 02:28:00 PM

John Edwards dropped out of the primaries just before North (or South ?) Carolina (I'm not sure on this), when he still had a good chance to get some delegates from working class voters.
Speculation, among family members here, has it that one of the campaigns (Clinton or Obama) knew about this, and held it over his head. This would be interesting to know, particularly since no one he worked with (other than Elizabeth) knew about it.

This just add more fuel to the fire for the Right Wind mouth pieces who will somehow find a way to attach John Edwards personal failure with not only the Democrats but, the Obama campaign.

The timing couldn't be worse.

That may be one of the most appropriate misspellings I've ever seen! LOL!