BigDavefromQueens over at DailyKos credits Howard Dean with coming up with the best line of the year regarding the election. He stated:

Dave then goes on to list all the reasons why this is effective:

1. It's true.
2. It's funny.
3. It links McCain to Bush's Third Term.
4. It shows McCain's lack of integrity.
5. It reminds people that John McCain is the world champion flip flopper.
6. It reveals how unelectable McCain's 2008 stands on position are.
7. It reminds people of McCain's radical associations.
8. It eviscerates his prior claims of independence and bipartisanship.
9. It's pointed without coming across as negative.
10. It serves as a gateway to a litany of talking points.
11. It demonstrates that John McCain will say or do anything to get elected.

We all remember Big Dave (who dropped the "big" from his handle and is now known as simply "DaveFromQueens") as one of the most colorful characters on the scene during the Lamont-Lieberman race. Dave would often show up at Lieberman events wearing his Bush mask and confront the senator. Here's my favorite image of Dave: 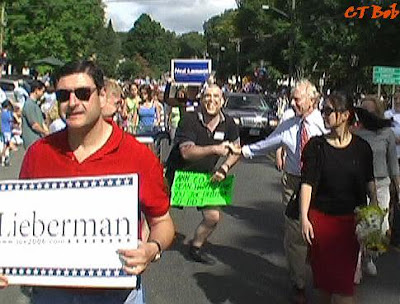