And no, I'm not talking about his desire to achieve a non-Viagra assisted arousal.

That would be "Rush Limbaugh's WET dream".

Now that I've completely nauseated all of you, here's what I'm really talking about. Four months ago on his stupid radio show, Limbaugh blathered about his "dream" of rioting at the Democratic National Convention in Denver. Something along the lines of the "police riot" that occurred in Chicago in 1968, and was at least partially responsible for Richard Nixon's election later that year. 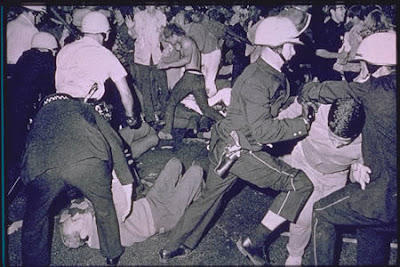 (Rush's "dream" convention)
That's some dream you got there, Rush. Compare that to MLK's "I Have a Dream" speech, or Barack Obama's "Dreams of My Father", and you can see just how diseased Limbaugh's mind has become. The man is suffering from cancer of the soul.

Big ol' Ed over at Caterwauled has a nice video from Fox News that exemplifies the wingnut's most hallowed hope for the convention. They're trying real hard to color the event as a "riot" or "disruption", when in fact it appears to be merely a peaceful march...except that everyone is yelling "Fuck Fox News!"

Funny thing about some of those marchers in Ed's video. I don't doubt for a minute that the bandanna'd marchers are RNC plants sent to try to mess things up. The real activists are willing to show their faces and stand up for their beliefs. Typical Republican dirty tricks. Hopefully some inventive blogger on the scene will somehow manage to expose them and their tactics.

I'm fairly certain that Limbaugh's rant below falls under our nation's first amendment speech protections, since he clouded his rhetoric with the word "dream" rather than expressly saying he encouraged riots to break out in Denver; which would likely run afoul of one or more Federal laws against inciting a riot or conspiracy to do something stupid or similar stuff (I'm not a lawyer, obviously). But his meaning four months ago was clear, and it remains crystal clear today.

As crazy as he's been known to be, he has clearly crossed a line here. Someone spring a drug test on Rush; I'll bet a million bucks that he's pissing pure Oxycontin.

Welcome back and thanks for the nod. BTW, you should check out the Middletown Eye (www.middletowneyenews.blogspot.com), we have an insider correspondent at the Dem convention. I can't tell you her connections, but we hope she gets to see some things others won't.

Good to be back.

Keep me posted on any notable reports from your mysterious correspondent. I'm so busy this week there's a good chance I'll miss it.

BTW, I just realized that it only takes 10 days for my typing skills to completely atrophy. You wouldn't believe how many mistakes I made in the preceding paragraph.

So, now we have Chris Shayney?

Heh heh...that's a good one! I gotta do a "separated at birth" post!

I was at the 80 convention for that speech, as seeing him (possibly for that last time), I had tears in my eyes.