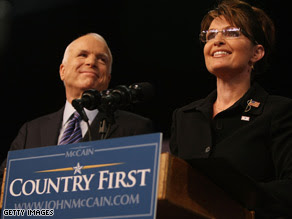 You have to wonder exactly what went on in John Sidney McCain's mind during the VP selection process.

He had a slew of high profile names to choose from, and he ended up selecting a complete unknown who's in the midst of an ongoing ethics investigation. You have to ask yourself, why?

Were they hoping to capture the disaffected Clinton voters? Is it really that big of a group that McCain would sign on a complete unknown for a running mate, solely on the basis of gender?

There were some strong finalists under consideration. My personal favorite, Sen. Joe Lieberman, would have certainly given McCain a viable ticket. Lieberman has done more for Sen. McCain than any other single Republican during the campaign, and I wonder what it was that caused McCain to pass Joe over. Was it the last-minute smear job by Karl Rove against Lieberman that did it? I don't think McCain feels that he can win this without Rove's help, so he may have been afraid to cross him.

That left Minnesota Gov. Tim Pawlenty among the finalists. He's a fairly young and telegenic candidate with strong conservative credentials, and MN is expected to be a battleground state. I don't know of any major drawbacks to his selection, but possibly they found something during the vetting process that eliminated him.

Former MA Gov. Mitt Romney was probably ruled out because of his own mega-millionaire status and his pro-Choice credentials. Massachusetts is strongly Democratic, and he would have been hard pressed to deliver his home state to McCain.

Others such as Rudy Giuliani and Mike Huckabee were eliminated early on in the process.

So why did McCain's campaign wait so long to look at Palin's ethics investigation? Celtic Diva reports:

A very reliable source overheard Republican spokesperson McHugh Pierre state TODAY (Friday) that he had spoken to the McCain Campaign. They are coming to Alaska tomorrow to check out the "Troopergate" investigation.

I'm getting the feeling that McCain's campaign was completely stymied until almost the very last minute on whom to select. This decision has all the characteristics of a rush to judgment.

I'm starting to worry that Palin won't last long enough to get through the convention! It would be a lot more devastating for the Republicans to have her get through the nomination and THEN have to step down because of her numerous scandals.

Then the fun will REALLY begin!

The point being, though, that bloggers have to get this out on the Net. The MSM doesn't have the balls to do, unless they're reporting on what the Net is saying.

It'll get out. Bloggers are great at researching this kind of stuff, and once it's posted on the national blogs, we'll see the MSM follow suit.

i need clarification; was sen lieberman being your favorite choice sarcasm? i can understand if it wasnt, but it is rare to seem something favorable of lieberman of this site!

There were great quotes from the REPUBLICAN State Senate President of Alaska.
"She's not prepared to be governor. How can she be prepared to be vice president or president?" said Green, a Republican from Palin's hometown of Wasilla. "Look at what she's done to this state. What would she do to the nation?"
Talk about party unity.
http://www.adn.com/politics/story/510249.html

Lieberman would have been my favorite choice because I've got SO much material on him, the blog would have essentially written itself for the next two months. My archives are well stocked with Lieberman info.

I guess McCain found his Cheney

The pot is starting to boil. I had seen this coming a few days ago but thought it was a little too over the top to mention. But, it's out there now, all over the place. Stories that the new baby is daughter Bristol's, not mama's:
http://www.ireport.com/docs/DOC-69834
How very weird.
oldswede

Rafting contest with blow up sex dolls instead of rafts
www.englishrussia.com/?p=208

Women deserve better than being used as blow up dolls in a whitehouse race. As Rodney said - No respect! McSame should respect women enough not to use them as personal flotation devices.
http://englishrussia.com/images/bubble_baba/11.jpg

There's an AP article on today's (8/31) NYT site about Palin's flip-flop on the Bridge to Nowhere. McCain has been praising her for resisting earmarks but it turns out that she was for it before she was against it.
Poor McCain.
This article also cites Andrew Halcro's website, the one where I found the "Shadow Governor" posting.
So, the MSM, via the AP, is pointing towards the blogger with the real dirt, just like Bob predicted.
Article here:
http://www.nytimes.com/aponline/washington/AP-CVN-Bridge-to-Nowhere.html
oldswede

Sounds like today's story about McCain being forced by the Neocon mafia to bypass Lieberman is true; and Palin was a quick, yet unvetted, second choice. Good.