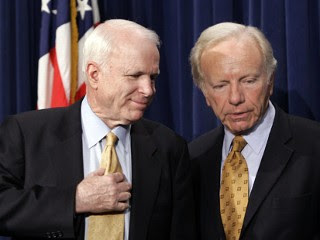 Sen. Joe Lieberman, in a completely transparent attempt to curry favor with Senate Democrats, has given $115,000 to the DSCC, according to a report at CNN.Com.

There are two possible reasons why Joe has suddenly become so generous towards the Democrats after several years of criticizing their actions and supporting a Republican for president:

2) His seat as Chairman of the Homeland Security Committee is at risk and he's attempting to shore up support against what will likely be his eventual expulsion early next year.

Here's how I see it playing out:

Joe, having given a bag of other people's money to the Dems, will get a nice Thank You note from some lower level official at the DSCC. Then, in November the Democrats will win a substantial majority in the Senate to go along with President Obama. The Democrats will decide they don't need Lieberman's mealy-mouthed "support", which in fact has been completely ineffective on the big issues, and they'll strip him on his HSC chairmanship.

Sometime in March or April, Lieberman will announce his retirement from the Senate for "health reasons" to allow Gov. Rell the opportunity to appoint an honest Republican as interim Senator in his place.

After years of Lieberman's weaselly lying, it'll be a refreshing change to have a senator who honestly opposes the Democrats, rather than a useless GOP surrogate who claims to caucus with the Dems but actually works stealthily to undermine their agenda.

Be careful what you wish for.

Have you *met* Rob Simmons? Odious.

For my part, the saddest day would be when JIL retires, because then we wouldn't get the chance to VOTE THE SOB OUT!

Felt the same way towards Weicker.

At least Rob Simmons won't stab the Democrats in the back like Lieberman does...he'll look us right in the eye as he wields the knife!

Wow, you guys are vicious!

Again, I can't help but point out that the only reason Democrats currently have control of the Senate is because Lieberman chose to caucus with them at the outset of the 110th Congress. Many of you don't seem to appreciate that fact.

Of course, Adam, keep in mind that Lieberman desperately wanted a chair of an important committee, so don't doubt for a microsecond that Joe was acting solely in his own self interest.

It boiled down to a deal; Joe said "I'll organize with you guys, and when you have the majority you'll give me my chair. Deal?"

We appreciate the fact that Joe Lieberman is concerned about one thing and one thing only: JOE LIEBERMAN!