Get ready for the mud 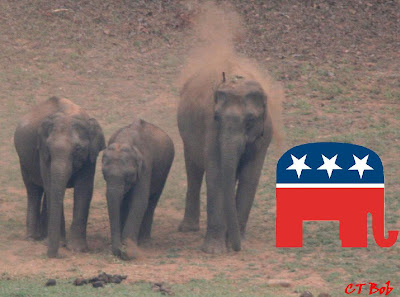 As the Democratic National Convention winds down, the GOP propaganda machine is coming to life. The upcoming week will probably see a world record for the number of lies and half-truths emanating from the Karl Rove-inspired Republican efforts to demonize Barack Obama.

It's already happening to some extent, with commercials and online videos that chop and parse Obama's words into something completely misleading. A good example is the recent ad that has Barack supposedly saying that Iran was a "tiny" nation and not a significant threat. Those are words that speak directly to the unspecific fears of middle America that the GOP lie merchants are trying to inflame.

Well, the context of those words was conveniently and deliberately omitted. Obama was discussing the comparative total mutually-assured destructive threat to the U.S. of the Cold War Soviet Union to Iran's fledging nuclear program. Of course, the GOP liars and warhawks wouldn't want you to know the truth.

The truth is, and this bears repeating at every opportunity, is that Barack Obama believes in diplomacy as a vital step in keeping our nation secure. He believes that war is the LAST resort, to be used only if all else fails.

John McCain and George Bush believe war is the ONLY resort. They bomb first, and worry about the mess they make later. Meanwhile, they create more terrorists with every bomb they drop.

So the GOP lies about Obama. And they'll continue to lie, all the way until November. They'll turn lying into an evil art form.

What we can do is become aware of the truth to counter the incessant lies of the GOP. Spread the word to correct their obvious lies. The Republican propaganda machine is rumbling to life as I write this, and they'll stop at nothing to ensure their way of death, destruction, and record profits for the military-industrial complex continues forever. And we'll all suffer for it.
Posted by CT Bob at 8/28/2008 08:20:00 AM

The fact remains that the Republican strategy is: "Repeat it enough so that people believe it." I'm still fielding questions about Barack's religion, etc.

We gotta turn this rule (which helped torpedo US in the past) against these lying SOB's.

McCain put his big lie in play long ago and it has deep roots now. The Maverick gimmick will be very hard to counter.
I am very curious about how the Repo party will play a couple of things currently in the news. The threat of Hurricane Gustav to the Louisiana coast and Vlad Putin's comments today about the US role in the Georgia debacle.
Tomorrow is the third anniversary of the Katherina catastrophe and the National Weather Service has been showing charts with Gustav on a path headed directly towards LA for several days. The Repo governor of LA is in panic mode, determined not to allow a repeat. Maybe if the levees had really been repaired, there wouldn't be such anxiety.
In Russia, Vlad is saying that the US orchestrated the whole Georgian fiasco to benefit a US presidential candidate. Oh boy.
Will the Repos attempt to spin this as Vlad wants Obama because he can push Obama around? That's my bet.
oldswede

Is it "bears"? Shit, I always get that one wrong. I'll change it.

I'm starting to like Putin. Guy's got some set o' balls.

You talk about peace, yet the CT dems semm to have no qualms about taking money from unions whose workers make weapons, such as those at sikorsky, pratt whitney and eb. in fact why have you no protests about the launching of another people killing sub from eb? I see ct dems do nothing but talk about helping the ct defense industry. At least the repubs admit they are all about killing millions of innocent people around the world because they feel americans are special yet the dems appear to be hypocrites. All dems should be calling for the disarmament of amerika not about helping the merchants of death.

Anonymous, you're completely full of shit.

Submarines are needed to PROTECT the nation, just like other weapons. We understand perfectly that we do need to protect ourselves.

Our big complaint is about an administration that misuses those weapons to start wars of aggression under false pretenses and continues to occupy sovereign nations against their wishes. Bush/McCain are all for using WAR as the policy, rather than smart diplomacy.

You can see where that's getting us.

Hey anonymous - to quote Tolkein: "It takes but one enemy to start a war, not two." (How's about Nazi Germany, then? We had disarmed fairly fully by the time we were attacked; and we BAREly beat the Axis - even combined with the Soviets & Britain.)

The need for arms is sadly all too obvious in this world (and BTW, the last submarine to fire in anger was in August, 1945).

There would be no need for weapons in the world if amerika disarmed itself. amerika needs to be knocked down many pegs. Bob you have said that you are likeing vladimir putin i am glad that you can see the real champions of freedom in the world hopefully a reenergised russia will be able to once again put the brakes on and lead the fight against capitalism and so called amerikan democracy. You with your blog can help out the struggle. One way every worker can help especially union members is to demand that all people be paid the same, this will erase all class distinctions. rather than making killing machines ct workers can lead the charge for true equality. The repub party will cease to exist and its members may well meet the same fate that they have dealt to afghans and iraqis. hopefully you are serious in your admiration for vladimir and mr symmes your jfk was an avowed enemy of the peoples struggle (bay of pigs, vietnam) so no true progressive would want to praise that capitalist tool.

And you look silly when you use the word "amerika".

And I presume CHina is a true Worker's Paradise?

Sweatshops of the world, unite!

(BTW, ask the Germans how much of an "enemy of the people" JFK was)

80% OF CHINESE WOULD NOT CHANGE THEIR WAY OF LIFE. The germans murdered millions of socialists and communists yet your jfk protected them when they were about to get a true workers paradise. Obama repeats the same old tired cliches about protecting amerika and its interests. stay out of world affairs and amerika would not need arms, they would not need to kill millions of workers and their families through the world. all amerikan leaders have done this regardless of political party. why do dems wave amerikan flags at their convention? did it not fly over slave audtions and exterminations of native peoples? Please tell me why you think amerikans deserve a country or for that matter any mercy from the rest of the world. If you don't rise against your system why should the world care about you?

You know what? You really ARE quite the amusing lunatic.

Oops, I spelled it wrong. I meant "lunatik"!

Imagine my surprise...how EVER did I guess CHINA? or is it KHINA?

Sounds like a G-Man trolling for comsymps to me.
oldswede

Doubtful. More probably a Rethug fishing for something to pin on us.

Time to pull the plug, I think.