She loses the PETA vote 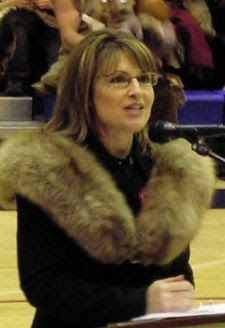 Somebody stop me, please! The more I look into this woman, the better she looks...for the Democrats, that is!

Apparently Sarah Palin is also referred to as the "Wolf Killer", because she repeatedly has refused to sign into law a bill passed by the Alaska legislature to prohibit hunting and shooting wolves from helicopters. I hope when Wolf Blitzer inteviews her, he's wearing Kevlar!

And her favorite food is "moose stew" (whoops! there goes the vegan vote!). Sarah's quite the outdoorsy gal, willing to shoot anything bigger than her head and then throw it in a pot of boiling water.
Posted by CT Bob at 8/29/2008 01:14:00 PM

Not only that, but she looks and sounds exactly like Sally Field. I was going to find an image of Field accepting the Oscar ("You like me, you really like me!") but I figured, why bother? You can't tell them apart anyway.

Hey Moose stew, what will Rocket J. Squirrel have to say about that. Keep digging I love this stuff.

Of course, Palin will have to get used to working under McCain...talk about tough work.

No, wait, that’s a funny one, but who is he really picking as his running mate?

I mean, even the republicans would undermine America and its future like that...right? right! wtf

OMG.
McCain looked very confused when Tina Fey was introducing all her kin folk. I think he was wondering why his friend Joe Lieberman didn't come to the Junior high pep rally.
I can't wait until she does the breathlessly excited cheerleader bit when talking about Afghanistan with Biden.
As a woman, it just shows me once again that McCain cannot deal with a woman as a equal. They are all just interchangeable underlings or ATMs.
He probably thought she'd been hired to be his secretary.
UptowNYChick.

That's the ultimate beauty of this whole maneuver: Lieberman actually THOUGHT he had a chance at being VP; and in his ambitious little mind, he figured he'd end up as President in as soon as two years afterwards, seeing as how McCain has the life expectancy of an arthritic 14-year old Saint Bernard.

Lieberman didn't show up for the Palin love-fest, and I'd imagine he'll soldier on through his "hate all Dems" speech, but his heart really won't be in it. What a terrible disappointment for our junior senator. And I'll bet it was Karl Rove's pronouncement that took Joe out of the running.

Couldn't of happened to a more deserving guy.

I wonder if McCain thought this through enough to realize how much it could motivate the Clintons to actively support Obama. Hillary will not be happy about the prospect of a Repo woman positioned to get to the White House before she does.
oldswede

So its come down to this:

Absolutely astonishing material about the Palins on line at a Republican's blog in Alaska.
I followed a link from commenter kimwim on Colin McEnroe's blog to this site:
http://www.andrewhalcro.com/shadow_governor

After reading the above, go to the home page and read through some of the articles listed there. You will find amazing stuff about Sarah and Todd Palin. Didn't McCain vet these people at all?
Mr Halcro is an Alaskan Republican who had a weekly newspaper column in the Anchorage Daily News. His continuing professional education includes the Kennedy School of Government at Harvard and the Harvard Business School. Not a lightweight.
oldswede