Yesterday I attended a talk at University of New Haven given by Juan Melendez, a man who was convicted of murder, sentenced to death, and spent 17 years on death row awaiting execution.

There was just one little problem...he was innocent. 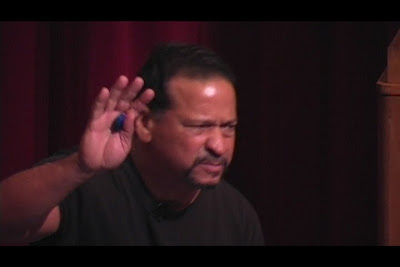 After spending the better part of two decades waiting for the State of Florida to take his life, evidence of prosecural misconduct surfaced, causing a judge to reexamine the case.

Turns out the prosecutor received a taped confession from the real killer about a month before the trial, and he decided to suppress the evidence rather than risk his case. Prosecutors have immunity to misconduct charges in Florida.

Since his exoneration on Jan. 3, 2002, Mr. Meléndez-Colón has been sharing his incredible story about the injustices of the death penalty. He is on the boards of Witness to Innocence and the National Coalition to Abolish the Death Penalty, and his story has been the subject of the documentary called "Juan Melendez 6446." 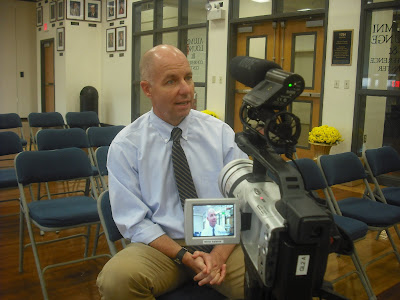 Rep. Mike Lawlor (D-East Haven) is a professor of criminal justice at UNH, and he discussed the current state of the death penalty in Connecticut for a documentary on the topic that I'm involved with. Mike spoke about the reality of the current law, which is basically nobody is likely to be executed in this state unless they want to be executed. Only one person in Connecticut over the last 50 years has been executed, and that was Michael Ross, who fought for 10 years for the right to be executed. Had he fought against it, he'd probably still be alive.

And early next year, the issue will surely be addressed again by the legislature, which is expected to once again pass a repeal bill which will make its way to the new governor's desk. Dan Malloy has already said he'll sign it. Tom Foley stands on the side of the death penalty supporters.
Posted by CT Bob at 10/20/2010 09:09:00 AM

>>Prosecutors have immunity to misconduct charges in Florida.

A life sentence also places the convict into the general population instead of the solitary (and safe) confinement of Death Row.

Hayes ought last about 10 minutes in the general population before some other lifer knocks him off.

I hope the jury considers the reality of the situation.

If I understand you correctly, you'd like him executed to save him from being killed? ;)

I'm nothing if not consistent.

Like you I oppose the death penalty, but in my case I do so partly because I'm not entirely opposed to murder.

Let's face it, some guys just need killing, and Hayes is just that kind of guy.
The fellows in the general prison population would surely take care of things in a jiffy.

The only crimes that should demand the ultimate price are those where there's simply no excuse; treason, littering and vandalism.

(Adding law abiding drivers that won't get out of the left lane is awfully tempting though.)

Heh heh! It's good to have you commenting here, ACR. I agree on the death sentence for slow drivers in the left lane. Enforceable immediately, I hope!

I've always been somewhat ambivalent towards the death penalty. Like, I truly feel there are some people who do things that make them absolutely deserve to die for them. But instinctively, I tend to feel that it's wrong for a society to take part in judicial murder.

Since I've been involved in this film project, I'm seeing that there really isn't any way our nation can continue to justify this sort of killing. Not when there are so many problems with the way justice is handed out in these cases.

First off, if you're a poor minority, the odds are magnitudes higher that you'll receive a death sentence than if you're white or wealthy. In many cases, for identical crimes.

Then there's the way the system is set up. A death sentence usually means anywhere from 10 to 25 years of additional litigation before the sentence is carried out. Each step of the way, the families of both the victim and the defendant are continually forced to relive the monstrous details of the crime. Michael Ross wanted to die, and it still took ten more years of legal wrangling to allow him to get his wish.

The way the death penalty laws exist, there is simply no way a person who doesn't want to die will ever be executed in this state again, not before they die of old age. It's just not going to happen.

So, we're stuck with a death penalty that applies only to people who commit especially heinous crimes AND want to die. What's the point?

>>But instinctively, I tend to feel that it's wrong for a society to take part in judicial murder.

With the exception of treason, I agree with all your remarks.

It costs twice the price, and occasionally some innocent character winds up on death row.

Treason? Hmmm...I think Julius was certainly guilty of something, but Ethel's culpability is absolutely in doubt. Yet, the government couldn't strap them both in the chair fast enough.

If they were kept in jail for, say, five years, it would have become glaringly obvious the Russians would have developed the bomb on their own anyway. It was simply a legal lynching brought on by antisemitism and Red-scare hysteria, in my opinion.

Not sure if papers from the Kremlin support you or not.

I'm pretty sure Sacco and Venzeti were victims of over zealous prosecutors.

>>If they were kept in jail for, say, five years, it would have become glaringly obvious the Russians would have developed the bomb on their own anyway.

They wouldn't have the bomb in anywhere near 5 years without the Rosenbergs.