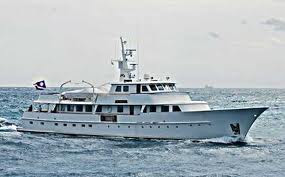 State Democratic Chairperson Nancy DiNardo stated today that GOP candidate Tom Foley should dock his 116' motor yacht "Odalisque" here in Connecticut, rather than in the Marshall Islands, where the foreign-flagged luxury yacht is exempt from state and federal taxes. NBC Connecticut has the story.

For the record, my 30' non-luxury yacht is docked here in Connecticut, where I pay an annual registration/tax fee. Additionally, when the boat needs work I spend money here in town and hire local tax-paying workers to do the work, rather than employing foreign nationals on foreign soil where I could possibly save a few bucks at the expense of putting dollars into the Connecticut economy.

So I definitely pay more in taxes on my humble boat than multi-millionaire Tom Foley does on his multi-million dollar luxury yacht!

Why is it the richest Republicans always do whatever they can to cheat the state/country out of paying their fair share? Why does Linda McMahon want to extend the Bush tax cuts, when the 1990s was a decade of very high economic growth where generally everyone benefited?

In Linda's case, she has about 10,000,000 reasons. That's the amount of money she'll save by paying taxes at the Bush tax rate, rather than the previous rate that was in place during the 1990s. Every year. No wonder she'll spend millions of her own money to try to beat Dick Blumenthal; she'll make her money back with interest if she wins!

By the way, the name "Odalisque" is defined as:

"...a female slave or concubine in a harem, esp. in that of the sultan of Turkey."

Does anyone think for a minute that good ol' Bush-buddy Tom Foley is going to be overly responsive to women's issues when he thinks it's perfectly acceptable to name his yacht after a female sex slave? 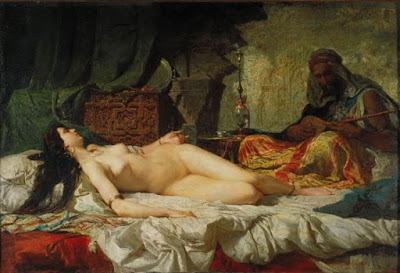 The Marshall Islands are a fairly long haul if you just want to go on a day cruise, don'cha think?
Anyway, a little history of the the Marshalls and the Americans:
"In the late 1970s, while still under UN Trust status with the U.S., a growing desire for independence led the Marshalls to embark on an endeavor towards self-determination. This was eventually accomplished in 1986 when the country was transformed into a self-governing democracy in free association with the U.S.: the Republic of the Marshall Islands." Lots of other interesting stuff on the page. Did you know that both Bikini and Enewetok, where the US did a lot of big bomb testing are in the Marshalls. Kwajalein Atoll is an important US military base where missile testing is performed. The US military has major interests in the Marshall, so you can bet that Foley's slave ship gets the benefits of US protection without the nuisance of mainland state taxes.
oldswede

Oh, and don't forget the "Sexy Bitch", as an example of the sensitivity of the McMahon clan.
Really evolved, these goppers.
oldswede

Not sure about your "yacht", but mine requires a trailer so I pay an additional registration fee.

So I assume you also tow it behind a registered motor vehicle, upon which you ALSO pay taxes! How's it feel to pay more taxes than a multi-millionaire?

My goodness! Imagine if he actually paid those taxes right here in Connecticut! Why, the Connecticut General Assembly would have another $3 million of taxpayer dollars to give Angry Dan Malloy for his political campaign!

So, you're actually happy that your hero is a state tax cheat? Amazing!

You lead by example. Let me know if Tom Foley ever created a single job in this state.

Other than hiring someone to do his landscaping, that is!

Yeh, right up there with John Kerry...c'mon fellas, so lame, at least Foley worked for his money instead of licking for it. Yum, ketchup is tasty.

Yeah, Foley "worked" for his money by taking over a plant, closing it, and bankrupting it. Wow, I can't wait to see what he'll do to Connecticut!