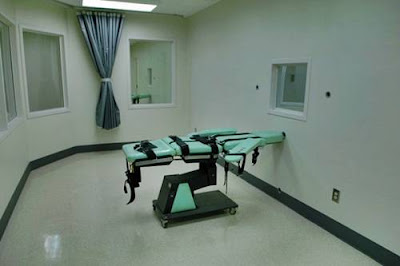 Quinnipiac released a poll about the death penalty this morning. They asked a series of questions, none of which produced any major surprises.

Stephen Hayes, recently found guilty of the Cheshire home invasion murders, is awaiting sentencing for his capital conviction. Responders to the poll want him to suffer the death penalty by an overwhelming margin, 76% to 18% with 6% undecided.

The general question of whether convicted murderers should be given the death penalty or life in prison without any chance of parole resulted in a more even split, 46% for death, 41% for life w/o parole, and 14% undecided. And this was polled during the emotional aftermath of a dramatic trial. I think people generally are fine with the idea of life in prison, as long as there's absolutely no chance of them ever being released.

There is one question I wish they'd asked:

Do you feel that the death penalty is a valid deterrent?

Because obviously, it didn't deter Hayes from perpetrating his crime.

Several months ago Hayes apparently attempted suicide by hording prescription pills and taking them all at once. How is it morally acceptable to demand the state keep someone from taking their own life, only to have the state take that life at a later date if it sees fit?

I understand the emotional need for vengeance, especially for such an horrific crime. But if Hayes thought being in jail was a worse punishment than death, why wouldn't people want life in prison for him?

Another question the poll asked was "If a candidate for governor were to take a stand on the death penalty that was different from your own, would you vote against that candidate on the basis of that issue alone or would you consider other things before deciding who to vote for?" Only 6% responded they'd vote against, meaning the issue isn't a deal breaker for either candidate. People seem to be much more concerned with jobs and taxes than the death penalty.

I'm currently in production of a documentary about the death penalty debate, so this issue is very pertinent to me. Certainly next year we'll revisit this issue at the State Capitol, regardless of who sits in the governor's office.
Posted by CT Bob at 10/13/2010 07:38:00 AM

You know, the death penalty to me has never been about deterring anyone from committing a capital felony. there are really two kinds of murder - premeditated and impulsive (killing in self-defense is not murder).

Those that plan out a murder are usually sociopaths. They lack the ability to emotionally identify with anyone's suffering, have overly high self-esteem and self-value, and usually disregard consequences because they think they are too smart to get caught or too slick to be held responsible. The death penalty won't deter them.

For those who kill in a moment of passion the weighing of possible criminal sanctions never enters into their minds before the act is done.

No, to me, the death penalty is the elimination of those who have forfeited their right to walk among us... predators who have no value and will only make the world hideous by their continuing to draw breath standing on it.

I think of it as putting down rabid diseased animals.

Obviously there are many who share your view on this, judging from the latest poll.

I just have trouble with the concept of punitive murder. Which is what I feel the death penalty is.

And, since I believe some innocent people have been executed, does that make our entire legal system guilty of murder? Who's accountable for something like that?

Good point. There have been people wrongly convicted of murder and executed. However, as forensics continue to improve the likelihood of that has greatly diminished over time.

That sometimes the innocent are held as guilty is an unfortunate byproduct of having a legal system. It will never be flawless. We can just work harder to make sure it happens as infrequently as possible. otherwise, we risk being unwilling to enforce any sentence on the off chance that someone is innocent despite the evidence.

Thanks, this is a good discussion.

One thing I can point out is that if someone is found innocent while serving a life sentence, they are released. But when an innocent is wrongly executed, all you can do is say "sorry" to the deceased person's family.

Yes, forensics have gotten better. But regardless of the guilt or innocence of the condemned person, we still come back to the debate about whether we should, as a society, be in the business of executions.

It's a very complex issue, and as I said before, we'll see it raised next year without a doubt.