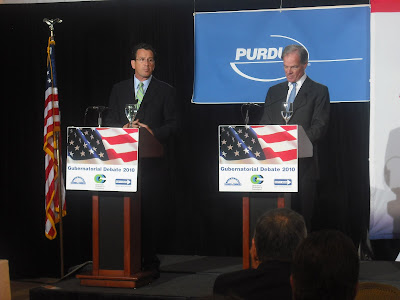 Debate television audiences are usually so tiny that they barely register on a Nielsen meter. Those who tune in have made up their minds and are seeking reinforcement, much like a Sean Hannity or Keith Olbermann viewer. Still, compared to a 30-second TV ad or a direct mail bomb, debates at least offer up a measure of the candidate, mano a mano. It's one more piece of the puzzle, so tune in this week.

On Friday, gubernatorial candidates Dan Malloy and Tom Foley squared off for their first televised debate in Greenwich (see this post). The candidates followed the standard format for modern debates, with each getting a couple minutes to answer a question, then an additional minute to respond. Not exactly a recipe for oratory fireworks.

Wouldn't it be nice to see U.S. Senate candidates Richard Blumenthal and Linda McMahon lighten up, wander off the script and show that they are much more than the sum of their consultants. No Obama references, we know where you stand there, and please, I beg of you, no wrestling metaphors. Connecticut, which is near the bottom in creating jobs and getting money back from the federal government, needs more than the 53rd Democratic senator or the 47th Republican, we need a senator who fights for Connecticut.

Haha Ned Lamont "debates at least offer up a measure of the candidate, mano a mano"

Too bad his debating skills where one of the many reasons he can't get elected.