Earlier today I attended the Gubernatorial debate between Dannel Malloy and Tom Foley at the Greenwich Hyatt, sponsored by the Stamford Chamber of Commerce. The debate is being replayed on Cablevision News 12 tonight at 8PM and throughout the weekend. It should also be available through the News 12 website and on-demand Cablevision channel 612.

I was a guest of Ned Lamont's and sat next to him at his table; it was the first time I've seen him since the primary. He was very relaxed and pleasant, and I took this picture of Dan and Ned minutes before the debate: 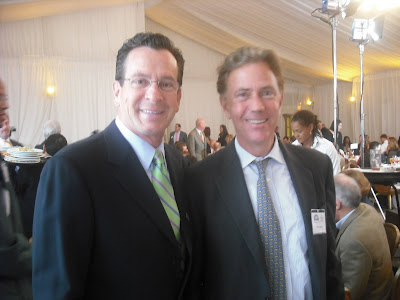 The debate started with a predictable question, what to do about the huge state deficit? Foley immediately said he wasn't a career politician and has ways to lead the state; and Malloy brought up how Foley ran for Governor only after realizing he wouldn't win the Senate nomination, and how he was rewarded with an ambassadorship after raising money for Bush, making him a career politician too.

The debate ranged between so-so discussions and heated exchanges. At one point Malloy thanked Foley for locating his campaign HQ in Stamford. 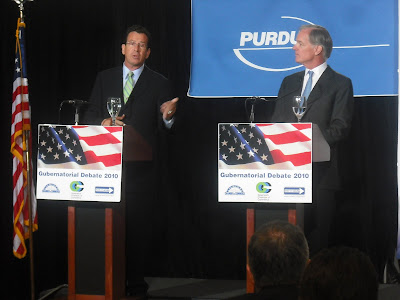 It was a luncheon debate, so we were served a meal (pretty much the usual "rubber chicken" you get during these kinds of events) but the coffee and chocolate mousse dessert were yummy! 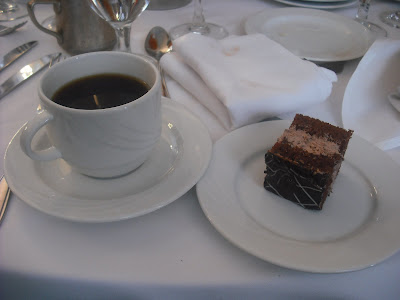 This was the first televised debate between the two candidates, and I suggest watching it either on Cablevision or through one of the online sources.

We're just over a month away, and we need to educate voters about the differences between these candidates.

Oh, and I saw the ginormous "Foley bus" there...

So really, in future, just give CT Bob dessert.

Heck, give him two so there is a serving to bring home to CT Joyce!

PS I have mini cupcakes for you guys today from the Young Leaders Roundtable in New Haven today!

What can I say? I'm a sucker for chocolate mousse!

I'm staying away from the mousse...I'm worried about getting shot at from a helicopter...

Yeah, after she gets the last of the moose, the mousse is sure to follow!