In a startling chain of events, President George W. Bush has received a letter of resignation from Donald Rumsfeld, Secretary of War Defense.

In a surprise announcement, President Bush then named Microsoft Billionaire Bill Gates as his replacement. Bill Gates has absolutely no foreign policy or military experience, giving him the necessary lack of experience to ensure his rapid confirmation by the Senate.

Mr. Gates is expected to be at least as unsuccessful as Secretary of Defense as Donald Rumsfeld, gauranteeing 2 more years of total disaster in Iraq, and soon, in Iran. 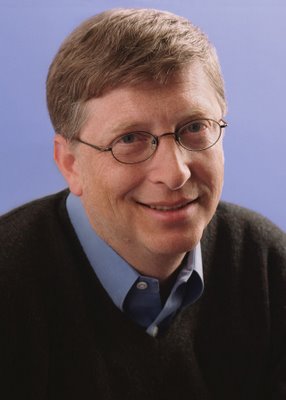 Would that it were Bill Gates. Bob Gates, Rumsfeld's replacement, is analogous to Bush's replacing Scott McClellan with Tony Snow. In other words, it might not get better and it might get worse. I'll look forward to the confirmation hearings.

Yeah, it's gonna be fun, especially if we carry a majority in the Senate.

Now that the election is over, Bob and I will use our editorial options here to delete political spam. It was a hard-fought election, with winners and losers on all sides. Trolls take up bandwidth without contributing to moving the discussion forward, so the party's over for you while the rest of us move forward.