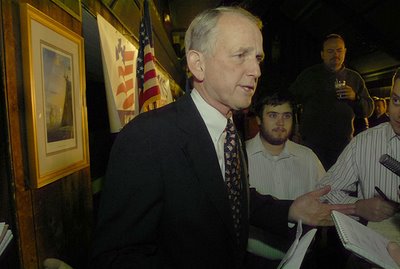 In this article in the Hartford Courant, Congressman Rob Simmons has announced that he'll accept the results of the recanvass and not challenge the election.

This makes Joe Courtney (CT-02) officially the next Democratic Congressman from Connecticut.

At a late afternoon press conference today in Mystic, Simmons said he doesn't intend to challenge the election results which had him losing to Courtney by 91 votes.

"Any effort to do so would only be self defeating and destructive to the people we serve," Simmons said.

Secretary of the State Susan Bysiewicz made the tally official Wednesday. The deadline to file any legal challenges is Nov. 21.

Courtney's win is a bonus for national Democrats, who already had all of the seats they needed to reclaim the House.

Take I-95 south and move down here and experience true political insanity. SC never got over starting the Civil War and it shows in spades.

Down here a 91 vote majority would be seen and hailed as a land slide, at least by the winner.

"Courtney's win is a bonus for national Democrats, who already had all of the seats they needed to reclaim the House."

Added bonus: From what I've read, this makes Farrell the only Democrat in all of New England to lose a race for a U.S. House seat. As I understand it, she spent most of her time trying to purge her campaign materials of any reference to Ned.

Yeah, that's kind of a bonus. The more I heard about Diane, the less I liked the idea of her winning. And I've heard some really dark stuff about her. Too bad.

Compare Rob Simmons concession with Lieberman's victory speech. Kudos to Rep. Simmons for having the grace to concede with such a small margin.

As for Farrell, sorry, but I never liked her and I wouldn't have voted for her had I been in her district. Lucky for me, I got to vote for Murphy.