So You Wanna Know What Really Happened? 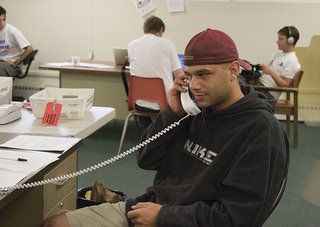 (I don't know why you wanted me to change the picture, Tim;
the other one looked just like you! hee-hee)

Tim Tagaris wrote a brilliant diary on MLN and KOS about the campaign. That, coupled with David Sirota's piece, pretty much cover the campaign to the point that I've decided not to write an opinion piece on the election; these guys got it knocked.

I'll probably just do a post-mortum from my own perspective, and not try to analyze the shananegans that went on in the corridors and back rooms of power.

Or maybe I'll express myself through video. If I can take going over all that old footage yet again.

Read Tim's diary over on MLN.

And if you haven't yet, read David Sirota's piece on the aftermath.

They tell it pretty much like I guessed. The outcome of the election was clearly affected by National Democrats, National Republicans, and Joe Lieberman's relentless lust for power.

Sadly, there's just not much room for an honest, decent man like Ned Lamont in that equation. Sure, some mistakes were made by the campaign; but the deck was obviously stacked against us. It was a million-to-one shot to begin with, and we've made it farther than I ever thought possible.

I know there is plenty of blame to go around, but I have to say I am very pissed at the voters that voted for the egomanic. i can't wait until we can elect more Dem Senators and make this gassbag irrelevant again.

i almost burst out laughing when you used "honest, decent" in the same sentence as ned lamont.

I don't know why. If you had known the man, you would think he is, too.

Just like I've met Joe Lieberman, many times, and know him to be a power-hungry liar who will stoop to any level to stay in DC.

And his shallow friends in DC did everything they could to keep him there. Sad.

Congratulations guys! You did it!

"Indeed, it is hard to imagine how Mr. Lieberman could have emerged better from last week¢s election. He was re-elected comfortably, and the Democratic Party he still belongs to is now in the majority, assuring him the chairmanship of the powerful Homeland Security Committee.

Yet that majority is slim enough, 51 to 49, to turn Mr. Lieberman into arguably the Senate¢s most influential member."